Liver Metastases: What can be done when bowel cancer has spread to the liver

Liver Cancer
Bowel Cancer / Colorectal Cancer
This article presents a comprehensive overview of secondary liver cancer and the treatments for it including surgery and chemotherapy. We believe this article will be of value to anyone suffering from liver metastases, particularly due to bowel cancer, who would like to know what treatment options are possible.

Bowel cancer can spread (metastasise) to various other organs, most commonly to the liver. Liver metastases occur in more than half of patients with bowel cancer and can often be treated surgically, or in combination with other treatments. This article describes how this can be accomplished safely, and highlights the importance of taking a multidisciplinary management approach.

The bowel and liver cancer link

Bowel cancer is the third most common malignant tumour in men and the second most common in women in Europe. Every year approximately 700,000 new cases are diagnosed and 400,000 people die from colorectal cancer worldwide. In the UK about 34,000 new cases are diagnosed each year. Of these approximately 60% will develop metastatic disease, of which, half will be localised to the liver. Liver metastases may occur either at the same time as the bowel cancer - (synchronous metastases) or some time after the primary tumour has been removed (metachronous metastases).  Surgery is the only potentially curative treatment although in the past only 10-30% of patients were considered suitable for resection.  Without surgery the average survival with palliative treatment is usually less than two years.

Several factors are important in determining whether a patient will be suitable for surgery. The distribution of the metastases dictates the technical feasibility, as at least 20-30% of the liver has to be preserved to prevent liver failure, a potentially lethal complication. However, the liver has a unique peculiarity in that it is the only organ capable of regeneration if part of it is removed. Indeed, a second and third reoperation can be performed to remove recurrent metastases, surprisingly with an outcome similar to the one observed in patients after the first surgical procedure. For this reason it is essential that patients are followed up for at least five years after surgery with repeat CT scans every three to four months for the first two years and six monthly or yearly thereafter.

Needless to say it is essential that patients are generally fit to undergo major surgery, although this doesn’t necessarily correlate with increasing age.  A large number of elderly people including some octogenerians are routinely operated on in our unit with a view to going home two weeks later and to returning to a normal lifestyle within three months or so.  Improvement in peri-operative care, including anaesthesia and intensive care support, as well as technical progress in surgical equipment, have led to a dramatic decrease of postoperative mortality, with very few patients dying as a result of liver surgery. This improvement is also associated with a better management of the complications, which occur in 20-40% of patients, the most serious ones being bleeding, infection, bile leakage and liver failure. A particularly important advance over the last few years has been the development of minimally invasive liver surgery, (laparoscopic or key-hole surgery),although this technique can only be used in selected cases. The benefit of this approach is mainly to speed up recovery and discharge. Patients can get out of bed the following day, have very little pain and can go home a few days after surgery.

In cases with initially inoperable metastases, preoperative chemotherapy can reduce the size of the lesions to the point where  patients can be operated on (down staging chemotherapy) (Figures 1 & 2). The response rate is greater than 50% and in a few cases metastases can even disappear on follow-up scans, though they will recur in the vast majority if surgery is not carried out. Complete pathological response, where the whole tumour is killed by chemotherapy, is indeed a relatively rare event which occurs in no more than 10% and should not encourage a wait and see attitude.

Chemotherapy regimens commonly comprise a combination of drugs, often including 5-fluorouracil with Oxaliplatin (FOLFOX) or Irinotican (FOLFIRI). More recently, biological agents, such as monoclonal antibodies, have been introduced in current clinical practice and have been associated with a greater response rate. The commonest ones are Bevasuzimab (commercial name Avastin) and Cetuximab (commercial name Erbitux), the latter, as a result of gaining approval by the National Institute of Clinical Excellence has recently been made available also to NHS patients. An ongoing trial, the New EPOC, is recruiting patients who are randomly treated either with FOLFOX alone or FOLFOX with Cetuximab.

Chemotherapy is often associated with several side effects and although it may be well tolerated by patients it also has a toxic effect on the liver. A period of at least four to six weeks is required to have elapsed between the end of the treatment and extensive resections, to prevent liver failure. 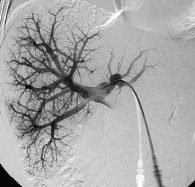 In cases where the anticipated proportion of liver to be removed is greater than 70-75%, it is possible to increase the volume of the remnant by blocking the branch of the portal vein (the main vein providing the blood supply to the liver) supplying the affected lobe of the liver. This causes shrinkage of one side and elicits a regenerative response on the other side (the unaffected lobe). This procedure is called portal vein embolization (PVE) and is routinely performed by our interventional radiologists in the x-ray department under local anaesthesia and sedation (Figures 3 & 4). The procedure is normally well tolerated and requires 24 hours hospitalisation. After a period of 4-6 weeks a liver MRI scan is repeated to assess the response prior to surgery.

Even combining downstaging chemotherapy and PVE, it is sometimes impossible to remove all the metastases with one operation and some patients require a “two stage” procedure where two liver resections are performed within three months or so to allow regeneration of the remnant liver and prevent liver failure. In other circumstances, and sometimes to avoid further surgery, it is possible to destroy some of these lesions with local ablation. Different types of energy used to ablate liver tumours include radiofrequency (RFA), microwave, electrolysis and cryotherapy, the first one being the most widely used in clinical practice. The recurrence rate after local ablation, however, is much greater than after surgery, and the success rate is proportional to the size of the lesion ablated. 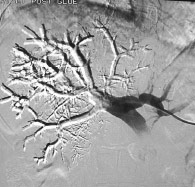 Finally, in very selected cases, it is also possible to remove the liver from the abdominal cavity, resect the metastases on the bench and reimplant the liver, with a technique similar to the one used for liver transplantation. This extracorporeal technique is an exceptional surgical procedure reserved for cases where the major vessels are involved and require vascular reconstruction and can only be performed in centres with liver transplant facilities.

With these strategies and a proper multidisciplinary approach it is estimated that an additional 10-15% of initially inoperable patients can today be offered potentially curative surgery. Unfortunately, however, a large proportion of cases will never be candidates for liver resection. Palliative chemotherapy can extend survival but cannot provide cure. A recently developed technique called selective intra-arterial radiotherapy (SIRT), has been tested in phase II trials and can be an option for these patients. With this treatment modality, 90Yttrium microspheres are injected into the hepatic artery supplying the liver metastases with the aim to shrink them or halt tumour progression. In a current trial (FOXFIRE), patients are randomised to SIRT alone or in combination with standard chemotherapy and outcomes are awaited.

Although the liver is a common target for bowel cancer, this malignant tumour can also spread to the lungs, lymph-glands, other intra-abdominal organs and to the peritoneum (the internal membrane lining the abdominal cavity). In the presence of extra-hepatic disease, the management of liver metastases is more complex, as the objective of liver surgery is to eradicate the disease and not to debulk it. In some circumstances a staged surgical approach can be appropriate, where liver surgery is followed by lung surgery. The involvement of the lymph-glands and peritoneal spread has been traditionally regarded as a contraindication to liver surgery. Although this remains true for the majority of the patients, there are a number of exceptions where lymph-glands near the liver can be cleared (after successful chemotherapy) and even the peritoneum can be stripped off (this procedure called peritonectomy is performed only in very few National Centres in the UK). 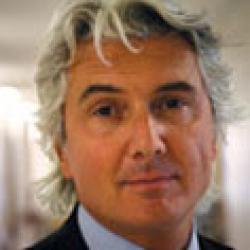