Progress in the treatment of advanced Prostate Cancer

This article presents an overview of the latest treatments for Prostate Cancer. We believe that this article will be of interest to anyone who has been diagnosed with Prostate Cancer and would like to know what their treatment options are, particularly during the advanced stage.

Prostate Cancer has been recognised as a clinical entity since antiquity, when it was first described by the ancient Egyptians, and surgery to remove the prostate was developed more than 100 years ago. In the last 30 years, the availability of a sensitive blood test for prostate-specific antigen (PSA) has revolutionised the diagnosis of prostate cancer leading to detection and cure of early prostate cancer. Against that, there was a recent report stating that screening provides a very small overall mortality benefit and that some men are harmed by the invasive tests and treatments that follow routine screening.(1)

In early prostate cancer radical prostatectomy, as compared with watchful waiting, reduces the rate of death from prostate cancer. If surgery is not appropriate, then conventional-dose radiotherapy (or implantation of radioactive “seeds” [brachytherapy]) may be appropriate, either as a single agent or combined with hormonal therapy. Hormonal therapy is not indicated for low-risk disease, whereas six months of hormonal therapy can improve survival in high-risk patients.

Although localised prostate cancer may be cured with surgery or radiotherapy, with or without hormonal therapy, the disease recurs in approximately 20–30% of patients.

This article will focus on the progress made in the treatment of advanced prostate cancer.

Studies in the 1940’s on the role of the male hormone, testosterone (a well-known androgen), led to the proposal of androgen deprivation therapy. Blocking the action of androgens has been the standard care of advanced prostate cancer since then.(2) Androgen blockade can decrease the concentration of the tumour marker PSA, induce tumour regression and provide relief of symptoms in most patients. However, the response to treatment may not always be long-lasting, and with time, PSA concentrations could rise, indicating relapse. Many alternative endocrine treatments have been evaluated in these patients, but none have led to prolonged survival, until recently.

Docetaxel: When given with prednisone, treatment with docetaxel every three weeks can lead to improved survival and response rate in terms of pain, PSA level, and quality of life.

PSA declines of at least 50 per cent occurred in half of patients, and objective tumour responses were observed in 20 per cent of patients with measurable disease. Side effects included fever, nausea and vomiting, and cardiovascular events.

The improvement in survival provides support for this approach in men with metastatic, androgen-independent prostate cancer.

Cabazitaxel: Treatment with cabazitaxel plus prednisone was shown to have important clinical anti-tumour activity, improving overall survival in patients whose disease has progressed during or after docetaxel-based therapy. The most common side effects were neutropenia and diarrhoea.

Sipuleucel-T: Sipuleucel-T, a form of immunotherapy, has shown evidence of efficacy in men with metastatic hormone-resistant prostate cancer as shown in a recent study.(6) Sipuleucel-T is an active cellular immunotherapy, a type of therapeutic cancer vaccine.

The effect of sipuleucel-T on survival was observed consistently across most subgroups of patients. Side effects were mild to moderate (grade 1 or 2) and included chills and fever headache, influenza-like illness, myalgia, hypertension, increased sweating, and groin pain.

A new and promising hormonal agent is Abiraterone, a drug designed and developed at The Institute of Cancer Research and The Royal Marsden Hospital, London UK.

Abiraterone is a selective inhibitor of androgen biosynthesis that blocks a critical enzyme in the manufacture of testosterone, thereby blocking androgen synthesis by the adrenal glands and testes and within the prostate tumour. Treatment with abiraterone, either as a single agent or in combination with low-dose glucocorticoids such as prednisone, resulted in anti-tumour activity among both patients with progressing hormone-resistant prostate cancer who had not received chemotherapy, as well as those who had received chemotherapy. The most common adverse events included fluid retention and hypertension; these events were lessened by co-administering low-dose glucocorticoids.(6) Improved survival was observed in many patients including some who had received previous chemotherapy. The use of hormonal agents is not typically considered in patients who have received prior chemotherapy. These results provide support for the evaluation of other endocrine therapies in this stage of the disease.

In summary, abiraterone plus prednisone can prolong survival among patients with metastatic hormone-resistant prostate cancer who had disease progression after docetaxel-based chemotherapy, with a low frequency of side effects.

In fact, abiraterone has not only led to improved survival in men with advanced prostate cancer but has also changed the way we think about this disease.

Radiotherapy can help to relieve symptoms of prostate cancer that has spread. It is particularly useful for helping to control bone pain and may help cut down on painkillers after radiotherapy treatment to areas of cancer in the bones. This can be given as a single treatment or several daily treatments. If appropriate, radiotherapy can be given via a relatively new method called the CyberKnife®.

The CyberKnife® is a robotic radiosurgery system which can be used for localised metastatic prostatic lesions. The two main elements of the CyberKnife® are the radiation produced from a linear accelerator and a robot which directs the radiation to any part of the body from any direction with the intention of targeting treatment more accurately than standard radiotherapy.

Internal radiotherapy for prostate cancer is the intravenous injection of radioactive isotopes called Samarium and Strontium. The mechanism of action is very simple. Samarium and Strontium, chemically speaking, are just like calcium. In the same way that calcium travels to bone, these two isotopes home into bone due to their chemical similarity and then give off radiation directly to the cancer cells. The treatment can shrink bone tumours, relieve pain and may delay the development of new tumours in the bones. The pain relief usually lasts for several months.

New Developments in internal radiotherapy include the use of bone-targeted radium-223. Radium, a bone-seeking radionuclide which emits alpha particles, was studied as a new treatment for patients with bone metastases from hormone-refractory prostate cancer. It was found that Radium was well tolerated with minimum myelotoxicity, and had a significant symptomatic benefit. These alpha particles are highly damaging and kill neighbouring cancer cells, but they’re extremely short range, so, normal cells further away will be spared.

It is likely that radium-223 will be approved and will become a standard treatment for men with bone metastases from prostate cancer resistant to hormonal therapy.

Cancer Stem Cells and the Challenges Ahead

Molecular analyses of prostate cancer have shown that prostate tumours express a wide range of genes associated with cancer stem cells.
Cancer stem cells (CSCs)(7) are a small group of cancer cells found within tumours that possess similar characteristics to normal stem cells. CSCs have the ability to be tumourigenic (tumour-forming), perhaps in contrast to other non-tumourigenic cancer cells. CSCs may generate tumours through the stem cell processes of self-renewal. They are probably resistant to standard treatments, leading to recurrence and spread. Therefore, development of specific therapies targeted at CSCs holds hope for improving survival and quality of life of cancer patients, especially for sufferers of metastatic disease.

In up to 70% of men with prostate cancer, a specific gene (p53) is absent or mutated. I am studying the hypothesis that, if one could maintain a high level of this gene in prostate cancer one could induce cellular senescence and arrest of cancer growth.

Trials on cancer stem cells and the miRNAs which regulate cancer are on-going and may provide possible therapeutic agents in the future. 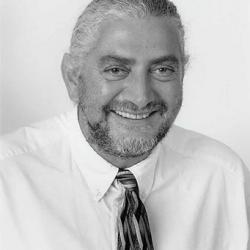