Breast Cancer
This article describes the development and introduction of a targeted form of radiotherapy for the treatment of breast cancer. It will be of interest and assistance to anyone exploring new treatment options for breast cancer.

For many women with breast cancer the standard treatment includes surgery, which removes the tumour with a margin of normal tissue (lumpectomy), together with radiotherapy, which reduces the chances of the cancer coming back. Radiation therapy is usually given as a 3-6 week course and this is known as whole breast external beam radiotherapy (EBRT).

During the mid-1990s clinical and laboratory studies suggested that radiotherapy could be safely restricted only to the tissues around the original tumour, and that this could be administered at the time of surgery. This is known as targeted intraoperative radiotherapy.

In the late 1990s, Professor Michael Baum, Professor Jeffrey Tobias and I collaborated with a specialist manufacturer to develop a new device (called Intrabeam®) along with the operative technique to deliver single-dose radiotherapy either during the lumpectomy or at a second operation soon afterwards. We called this new approach TARGeted Intra-operative radioTherapy (TARGIT) where radiation is given with a spherical device that is placed where the lump was, thus targeting the tissues that surrounded the tumour, the ‘tumour bed’. 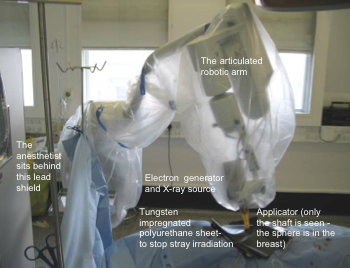 The first breast cancer patient was treated in this way on 2nd July 1998 and the safety of the technique was established over the next two years. In March 2000 we launched a large international randomised clinical study (TARGIT-A trial) that took 10 years to complete and directly compared the TARGIT approach with conventional EBRT given over 3-6 weeks. The TARGIT approach was to give single-dose TARGIT to every patient, and, if a higher than acceptable risk was found (for example tumour too close to the margin, many positive lymph nodes or tumour within many blood vessels) whole breast EBRT was added in about 20% of patients. The control group consisted of whole breast EBRT over 3-6 weeks. Patients could also be entered in the trial after the tumour had been removed for example, at another hospital. For such patients, TARGIT was delivered by re-opening the wound as an additional surgical procedure. In total, 2232 women from 28 centres in 9 countries participated in the trial. Out of these 1113 were allocated the TARGIT approach and 1119 the conventional radiotherapy approach. The results were published in the medical journal The Lancet on 5 June 2010.[1]

Advantages of the TARGIT approach

We found that at four years, the chance of the cancer coming back in the two groups was very low and very similar (0.95% in the EBRT group and 1.2% in the TARGIT group). We also found that the TARGIT approach had less long term side effects of radiation for breast cancer. We therefore concluded that for selected patients with early breast cancer, a single dose of radiotherapy delivered during surgery by use of targeted intraoperative radiotherapy should be considered as an alternative to external beam radiotherapy delivered over several weeks. Studies about patient satisfaction have found that patients who receive TARGIT have less pain, higher satisfaction and better health-related quality of life.

Given the similar outcome and lower side effects there are obvious advantages of the TARGIT treatment.

While we await longer term results of the trial, many specialists around the world are convinced about the TARGIT approach and are therefore cautiously introducing this as a standard treatment for selected patients who are older, postmenopausal, with a small ductal cancer with certain features, (e.g. grades 1 and 2, ER positive, etc.). You may be offered TARGIT as a standard treatment or as part of a clinical trial depending on your circumstances.

1. Is this a new cure for breast cancer?

No. This is not a new cure for breast cancer. It is a modification of radiation treatment (radiotherapy) that makes it less toxic, more convenient and possibly more effective.

2. What is so special about this radiotherapy?

Radiotherapy has been used in the treatment of breast cancer for several decades. As giving a large dose of radiation in one go can be toxic, it is normally given in several sittings, usually about 30, over 4 to 6 weeks. With the special TARGIT technique the radiotherapy is focused directly to the most important tissues. As it is so well targeted and the dose is restricted to only the most important area, it can be all given as a single dose and it can be given immediately after removal of the tumour.

3. For how long has this been studied?

The first patient was treated in July 1998, and since then over 2000 patients have been treated. Over 3000 patients took part in a large clinical trial (TARGIT-A trial) in 30 centres in 10 countries including the UK, USA, Australia, Germany, Italy, Poland, France, Canada, Denmark and Norway.

4. Has it been found to be successful?

In the TARGIT-A trial, in which patients were randomly selected to get either TARGIT or the usual radiotherapy, we found that the chance of cancer returning in the breast was no different between the two groups, four years after treatment. This result was published in the journal The Lancet in July 2010.

5. Does it have any side effects?

We have not found any major side effects of the new treatment. There are two side effects that were different between the two groups: collection of fluid was a little more than usual (2.1% vs. 0.8%) but radiotherapy related side effects were less (0.5% vs. 2.1%). Most importantly, wound healing or infection were not different and breast pain was much lower with TARGIT.

6. Can traditional whole breast radiation therapy be given even after TARGIT treatment is given?

Yes. We have a large number of patients in whom both treatments were given. We have long term data that firstly shows that combining the two is safe but it also suggests that in those women with aggressive tumours it could give superior results.

7. If I choose to take TARGIT treatment, does it mean that I will not need to take any more radiotherapy?

The TARGIT approach means an individualised approach. So if you are likely to be suitable, we can give the treatment during the operation. When we examine the tumour under the microscope, we find that in about 1 in 5 people, it is preferable to give both treatments. However, when this is done, the radiotherapy course is shortened by one to two weeks.

8. Why is it that the TARGIT-A trial is still going on?

The results of the TARGIT trial mean that we are confident that the technique can be safely used in carefully selected women. There are still some tumours for which we are unsure, and therefore we would like to test it further. So depending on your age and tumour type you could be offered TARGIT either as part of a trial or as standard treatment. 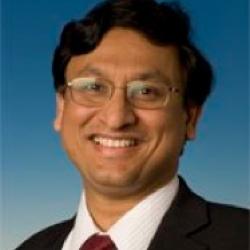