The chances are, you’ve heard a lot about breast cancer recently. October is Breast Cancer Awareness Month, designated to help to increase attention and support for early detection and treatment.

What you may have heard less about, even with this awareness campaign, is secondary breast cancer.

Unfortunately, 31 people a day in the UK – mainly women – die from the disease.  The median survival for people diagnosed with secondary breast cancer is 2-3 years.

Between 20-30% of those diagnosed with early-stage breast cancer will develop secondary cancer. Some cancers are de novo, meaning metastatic disease is diagnosed at the same time as the original diagnosis.  Or most often, it is diagnosed months or many years after treatment for primary breast cancer has finished.Celebrity women who have secondary breast cancer include Sarah Harding and Shannen Doherty.  Last year, actress Kelly Preston died of the condition.

Secondary breast cancer is the biggest killer of women under 50 in the UK.

Also known as advanced, stage 4 or metastatic, secondary breast cancer is when the cancer has spread beyond the breast and nearby lymph nodes to other parts of the body. This is often the bones, lungs, liver or brain – but it is important to note, it is still breast cancer, despite being in different parts of the body.

There is no cure for secondary breast cancer, although it’s best to find out if you are affected as soon as possible, as treatments can prolong life.

Jo Taylor, founder of Abcdiagnosis, an organisation and network offering peer to peer support for people with breast cancer, believes not enough focus is given to patients with metastatic cancer, with charities and their celebrity patrons preferring to focus on early detection.

She comments: ‘The figures are shocking, 11500 women die every year, from secondary breast cancer – 1000 die every month in the UK alone. Worldwide around 1430 die EVERY DAY.  There is no cure.  Yes, people are living with and beyond cancer, but the median average of 2-3 years life expectancy is still hard to accept.

This is not yet a chronic disease and people are dying much too young.  We need a cure.

Jo, along with other patient advocates, have come together to form METUPUK the only patient advocacy group for secondary breast cancer in the UK.

‘METUPUK believes secondary breast cancer research is underfunded, and that better access to drugs, trials and treatments could keep women living longer with the disease.

We are here to push and promote issues concerned with secondary breast cancer,’ explains Jo. ‘Our main concern is the fact that those diagnosed have a 2-3 year median life expectancy. An unacceptable outcome. We believe we can turn this into a chronic disease.’

One major area for METUPUK’s advocacy is the discrepancy between NHS and private healthcare, as well as the NHS’s poor record on advanced breast cancer, compared to other countries.

If you, or a loved one has gone through primary breast cancer, it’s very important to be aware of the ‘red flags’, the symptoms that indicate the cancer has metastasised. Take a look at the useful graphic from abcdiagnosis. 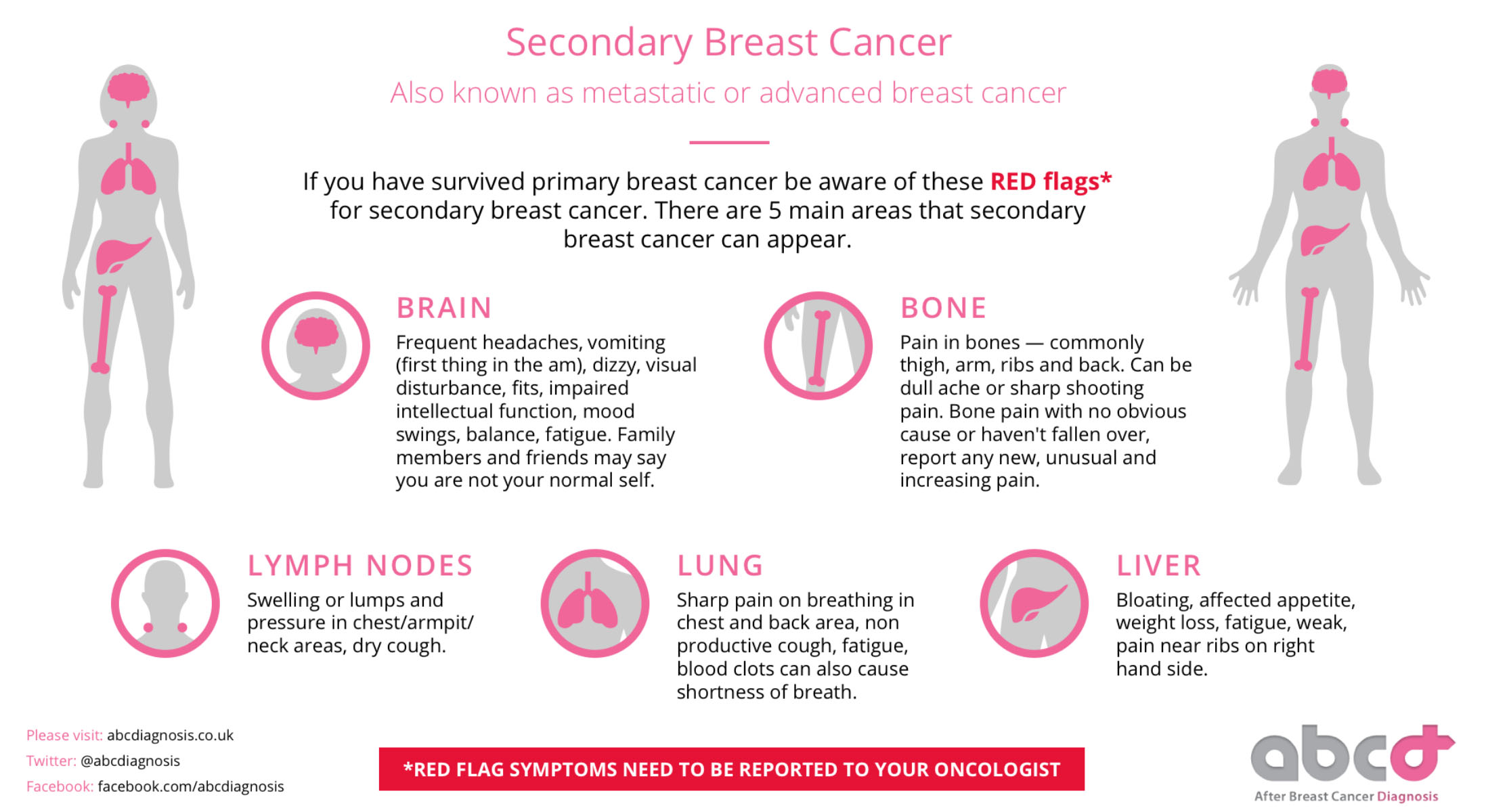 Pain in bones, commonly thigh, arms, ribs, and back. There can be a dull ache or shooting pain. Bone pain with no obvious cause – for example, as you haven’t fallen over. It’s important to report any new, unusual and increasing pain.

Sharp pain on breathing in chest and back area, non-productive cough, fatigue. Blood clots can also cause shortness of breath.

Bloating, affected appetite, weight loss, fatigue, weak pain in the ribs on the right hand side.

Look out for pain or tenderness in the middle or top of the back or neck, severe pain in lower back that gets worse or doesn’t go away. Pain in back that is worse when coughing sneezing or straining, but pain is worse at night, numbness or heaviness; a band pain around the chest or abdomen or pain down an arm or leg, changes in sensation, for example pins and needles or electric shock sensations.

Why epigenetics is important in predicting disease