When breast cancer is incurable

Breast cancer has several subtypes according receptors on the cell surface.  These are -

Oncologists use information from the receptors on cancer cells to plan treatment.  This is true for both primary and metastatic breast cancer.

What is metastatic breast cancer?

How is metastatic breast cancer diagnosed?

The signs and symptoms of metatstatic breast cancer can be non-specific and mimic other conditions.  A study by Breast Cancer Now in 2019 showed that one in four people with metastatic breast cancer visited their GP three or more times before being diagnosed.  In 20% of patients, their metastatic disease was misdiagnosed and they were being actively treated for other conditions.  Around 40% of patients felt their concerns were not taken seriously.  These were mainly women with a documented history of primary breast cancer.  Some patient’s symptoms were so severe that they were diagnosed in A&E.

Many patients feel that once they reach five years clear of a primary diagnosis, they are very unlikely to develop metastatic breast cancer.  Some doctors are also not vigilant for metastatic disease after five years have passed from initial diagnosis.  Unfortunately, the risk of recurrence carries on beyond five years.  It is for this reason that oncologists are increasingly prescribing hormonal therapy for estrogen receptive cancer for 10 years.

According to Breast Cancer Now patients with a history of primary breast cancer should seek medical advice if they experience any of the following  persistent symptoms.  Many oncologists define persistent as being for two weeks.

Patient advocate Jo Taylor of After Breast Cancer Diagnosis has created Infographics which have been adopted by several NHS trusts.  Her Infographics are particularly useful because they identify the differences in patterns of metastasis according to if the primary tumour was in the breast ducts (the most common type of breast cancer) or breast lobes (rarer). 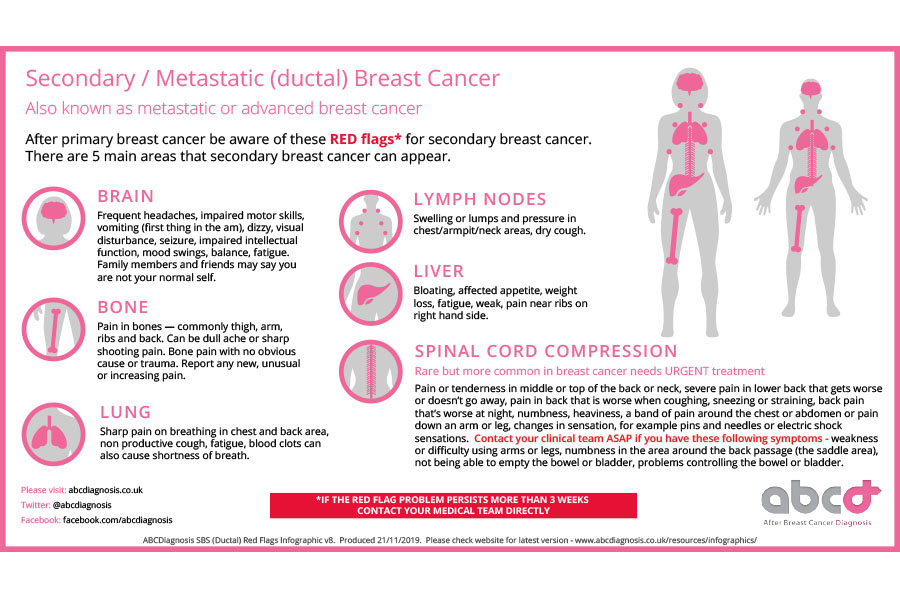 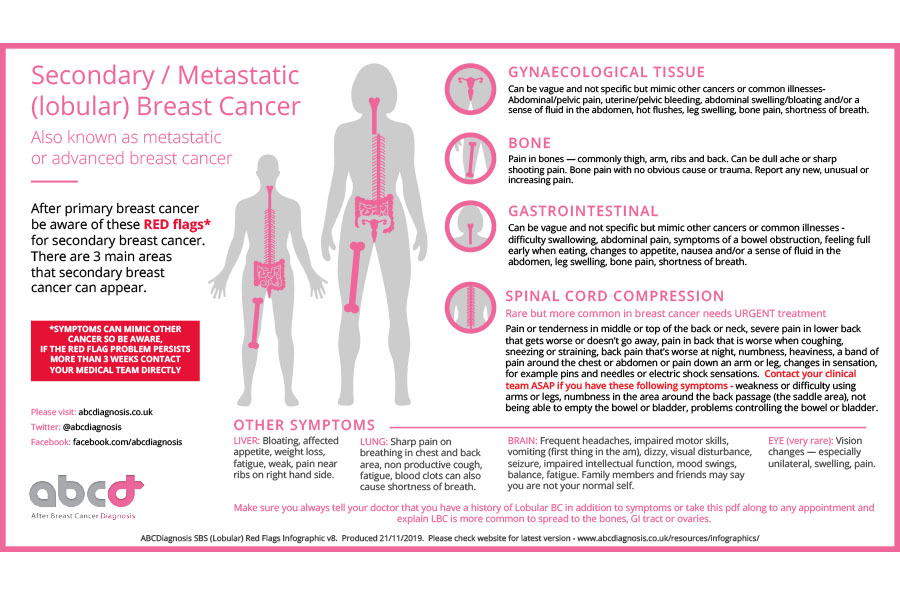 Doctors don’t fully understand why breast cancer can travel from the breast to distant organs.  Usually cancer cells are attacked by the immune system if they escape from the breast and travel through the blood or lymphatic system.  In metastatic breast cancer, cells are able to evade the immune system making the disease incurable.  It's thought that a number of genetic changes in the primary tumour have to occur to allow breast cancer cells to survive outside the breast.  In metastatic breast cancer, removing large tumours surgically does not remove the cancer from the body.  Cancer cells with the potential to form further tumours remain in the blood stream, lymphatic system and organs.

If you have a de novo diagnosis of metastatic breast cancer you will not necessarily be treated with a mastectomy or lumpectomy.  Usually patients with primary breast cancer will have breast surgery as part of their treatment.  With stage 4 cancer, it depends on the clinical judgement of your doctor.  The evidence for and against breast surgery is mixed.

Some doctors perform surgery on mets in distant organs, particularly if there are only a small number of deposits.  This is called oligometastatic disease.  Many oncologists disagree and consider surgery to be an inappropriate invention with limited success.

Is there any treatment after a metastatic breast cancer diagnosis?

It's important to understand that there are treatments around that will help extend your life. Many palliative treatments are purely focused on reduction of pain and improving quality of life without reducing the tumour burden, which is why palliative care is often associated with end of life care. In fact the origin of word palliative is the Latin word pallium meaning to cloak.  The purpose of palliative care is to focus on symptoms and pain relief.  All metastatic cancer treatments are palliative rather than curative.  Many reduce symptoms by reducing the size and number of active tumours in the body.  Sometimes patients respond so well to treatments that no cancer is detectable in the body using scans.  This is called No Evidence of Active Disease – NEAD.  Other people still have cancer detectable but it is stable and not growing.  This partial treatment response is also a favourable outcome. US research has reported that a small but meaningful number of women are 'outliers' - they live many years after an initial diagnosis of metastatic disease. More than 11% of women diagnosed between 2000-2004 younger than 64 lived for 10 years or more.

A central aim of research is to transform metastatic cancer into a chronic disease such as diabetes.

Breast cancer treatments are rationed on the NHS

The type of treatment offered depends on the subtype metastatic breast cancer. Subtype is determined by presence or absence of receptors on the cell surface of cancer cells.  Newer more effective treatments are constantly being developed and approved.  However, invariably these are expensive, costing tens of thousands of pounds per patient, often more.  The NHS uses a Quality Adjusted Life Year (QALY) to compare the cost effectiveness of drugs.  One QALY equates to one year lived in perfect health.  Typically the NHS considers a gain of one QALY to be cost effective at £20-30,000, rising to £50,000 for end of life drugs.  Most newly approved cancer drugs far exceed this cost, and so the procedure for approvals is drawn out.  New drugs are approved by appraising evidence from clinical trials.  According the the Institute of Cancer Research it takes an average of 14 years from a drug being patented to approval by NICE, and 9 years from phase 1 clinical trials to approval by the European Medicines Authority.

If the clinical trial only included patients newly diagnosed with metastatic breast cancer, then the NHS will only offer it to similar patients.  This is called first line treatment.  Drug companies often design trials with this patient population because they tend to be healthier and so it is easier to demonstrate that their drug is effective.  If a patient with metastatic breast cancer has previously been treated with an existing and less effective drug and progressed on this, they will not be permitted to access a newly approved drug if it is for first line treatment only.  Or more accurately, they will often only be able to access a newly approved drug if they fund it themselves.  Often, but not always, private health insurers will fund more drug lines than the NHS.

My advice for those living with metastatic breast cancer

We’re all individuals – so what works for me may not work for others with metastatic breast cancer. However, for me, keeping informed and up to date on new treatments and trials has been useful and helps me feel in control. I have also found that keeping in touch with other people who have fourth stage cancer gives me a support network I really value. Of course, old friends are great too, but some may be confused that you can look really well, but yet still have a terminal diagnosis. It’s important to explain that you may be able to go for a long walk one day, but the next you might find making a cup of tea a struggle. It goes without saying that having an oncologist who you can communicate with is vital.

Also, do remember when dealing with family, friends and work, this is a time to do what you really want. It's time to put yourself first.

To make contact with other women and men who have metastatic breast cancer and to campaign for better treatments, please contact MetUpUK

If you have just been given a metastatic breast cancer diagnosis and you want emotional and practical support, contact Breast Cancer Now and MacMillan Cancer Support. 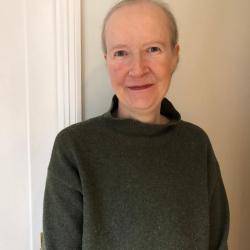