Like the rest of our bodies the spine is in its best shape in early adult life, but as the years go by after that the twin effects of age and the consequences of our ancestors having adopted an upright posture begin to take their toll. This article looks at the ways in which the spine changes as we get older, and the problems they can cause.

An ageing spine is a natural part of life but back pain and spinal defects do not have to be. This article looks at the management of the ageing spine and suggests ways to improve posture and pain through exercise, medication and surgery.

Introduction to spine growth and back pain

Like the rest of our bodies the spine is in its best shape in early adult life, but as the years go by after that the twin effects of age and the consequences of our ancestors having adopted an upright posture begin to take their toll. This article looks at the ways in which the spine changes as we get older, and the problems they can cause.

We have intervertebral discs between each of our vertebrae. They act as both spacing devices and shock absorbers, and are tightly attached to the vertebrae they join together. Their structure can be visualised like a very thick walled car tyre. The outer part of the disc, known as the annulus, is made of concentric rings of thick fibrous tissue (Fig 1). This surrounds and contains jelly like material called the nucleus pulposos. This structure is central to many of the problems in the spine associated with getting older. 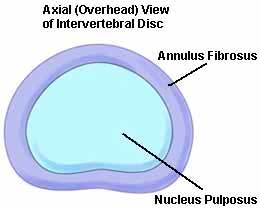 While the discs separate our vertebrae what can we say about the vertebrae themselves? In common with all bones these are composed of a thick outer cortex of dense and exceptionally strong bone, which surrounds a sponge like and very much lighter centre called trabecular bone. Bone marrow is found in the trabecular parts of vertebral bodies and serves many vital functions such as making most of the cellular components of blood.

The vertebral bodies act as a very strong scaffolding to support all the weight of all our internal organs, as well as our head and arms. Lying behind the vertebral bodies and intervertebral discs is the spinal canal, through which the spinal cord passes. This is protected from behind by the vertebral arches, which comprise the vertical pedicles and the horizontal laminae, with the spinous processes affording further protection behind and acting at attachments for the powerful muscles needed to keep us upright.

The first age related changes generally seen in the intervertebral disc are that the nucleus starts to become dehydrated. As this progresses it shrinks and the disc starts to lose some height. The annulus can also weaken and split, most often at the back of the disc, where the spinal cord and nerve roots to the arms and legs lie. With the high pressures inside intervertebral discs as a result of standing upright a split in the annulus allows material from the nucleus to push backwards towards the weakness (Fig 2). This causes a bulge in the disc, which is known by several different terms, such as disc bulge, prolapse, or herniation, but it is more widely known as a “slipped disc”. Sometimes the annulus splits completely allowing nuclear material to enter the spinal canal.

Disc herniations can happen at any level in the spine, but they tend to occur most commonly at the lower end of the lumbar spine, and also in the lower levels of the cervical spine. They can cause both pain in the back or neck, but more often they cause severe burning pain in a line down the leg or arm due to pressure from the bulging disc or nucleus material pressing on a nerve root. This nerve root pain is generally excruciating and does not respond very will to conventional painkillers. When the nerve pain is in the leg and due to a lumbar disc herniation it is called sciatica. When it is in the arm and due to a cervical disc herniation it is called brachialgia.

The pain from disc herniations tends to subside after a few days or weeks with simple painkillers. If it is problematic injections of steroids guided by x-ray or CT around the affected nerve root can be very effective at relieving pain. If pain persists despite several image guided spinal injections of steroids or if there are neurological complications such as weakness in the arm or leg, then the an operation is indicated to remove the offending material. 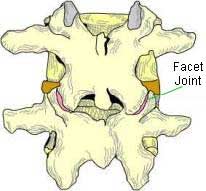 Discs can cause problems without bulging or rupturing. They can simply degenerate. Simple disc degeneration generally involves nuclear dehydration and shrinkage combined with annular degeneration. The combined effects of these is to reduce the distance between vertebrae. This can have a number of consequences such as back or neck pain and compression of nerves as they are leaving the spine.

While the intervertebral discs act as spacing devices and shock absorbers we have special joints between the vertebral arches. These are called facet joints, and are like other joints in that they are lined with cartilage and lubricated by synovial fluid (Fig. 3). These joints give our spines flexibility and movement (Fig. 4). Like all synovial joints they undergo wear and tear with age, with thinning of the cartilage and reduction of the joint space, eventually leading to bone rubbing on bone. The degenerative process in facet joints can be very painful. When in the lumbar spine it generally causes pain and stiffness in the low back, and often down into the buttocks or thighs but it never goes below the knee. In the neck it causes pain in the neck or shoulders, and often into the back or side of the head. It rarely goes into the shoulder or upper arm. 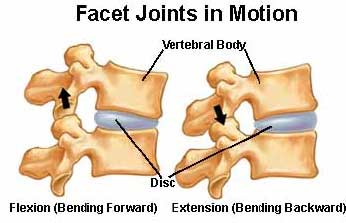 As part of the degenerative wear and tear process facet joints often undergo abnormal growth, a process called facet joint hypertrophy. This can lead to compression of spinal nerves.

Osteophytes are dense outgrowths of bone and are another example of degenerative changes in the spine. They tend to grow from the edges of vertebral bodies where the discs attach to the vertebrae (Fig. 5). When combined with a degenerative intervertebral disc they are known as disc osteophyte bars. They grow backwards towards the spinal cord and nerve roots, and they can also encroach on the interverebral foramen, the channels at sides of the spine through which the nerves enter and leave the spinal canal. They can compress both the spinal cord and nerve roots, causing sciatica and brachialgia, and in severe cases, spinal cord damage.

See ‘How can they be treated’ 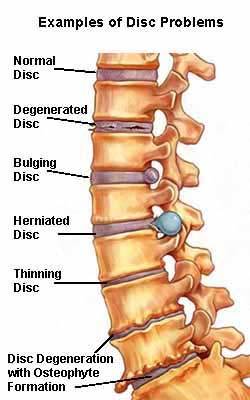 The pars interarticularis is the bony bridge holding together the upper and lower articular processes which articulate with their counterparts above and below to form the facet joints. This bridge can weaken and fracture with repetitive strain, producing what is called a pars defect, or alternatively a spondylolysis (Fig. 7). Pars defects don’t always cause problems but when they do it is usually tend pain in the low back. 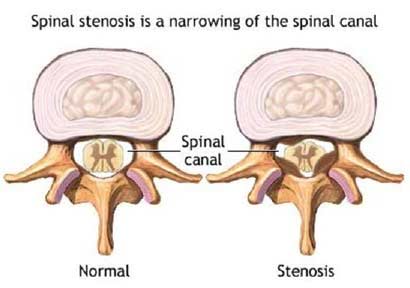 When pars defects or fractures occur to both right and left the vertebral bodies can slip forwards. When this happens it is a condition called spondylolisthesis. This is most commonly seen between the fourth and fifth lumbar vertebrae, L4/5 in medical shorthand but can also occur at levels above and below. It also most often occurs in women.  In most cases it does not require treatment, but in advanced cases it can cause both back pain, instability, and symptoms of spinal stenosis, with sciatic nerve pains in the buttocks and legs.

Management of the ageing spine

The importance of maintaining strength in the muscles supporting the spine cannot be emphasised enough. Regular exercise that strengthens both the thick muscles either side of the spine as well as the supporting abdominal muscles can dramatically reduce the impact of degenerative changes in the lumbar spine. Many people need supervised help from physical therapists to ensure they are doing the right exercises for the right condition, for their age, and for the level affected in their spine.

2. Analgesics and other medications

Painkillers are often needed in order to try to avoid the development of an abnormal gait and posture that often develop as a consequence of spinal pain and which can lead to worse secondary problems, and to ensure continued mobility. We no longer advocate bed rest for acute spinal problems. It is important to continue normal movement and daily activity as much as possible. The analgesics used to manage spinal pain are covered in some detail in an accompanying article “Understanding pain and painkillers”.

The image guided percutaneous treatment of spinal problems with small incisions or no incision at all is developing very rapidly, from spinal steroid injections as epidurals or nerve root blocks, through percutaneous discectomy or disc decompression (Stryker Dekompressor; Nucleoplasty), to more complex procedures such as radiofrequency tumour ablation, and percutaneous spinal fusion.

For advanced cases open surgery may still be required. Very many surgical options available for the management of spinal problems and to discuss them here would take hundreds of pages. The range of surgical options is continually growing and existing options refined. Spinal surgery nowadays bears little resemblance to the speciality of even ten years ago. 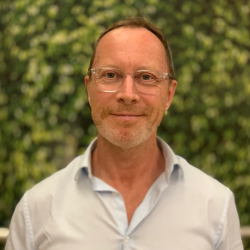 Is there a Standard Cure for Back Pain?

Sensors Diagnose the Cause of Back Pain

Back Pain and the Neurosurgeon

Rowing for ankylosing spondylitis (AS)