This article written by an expert Consultant Cardiologist outlines what heart rhythm disorders are and how they can cause symptoms such as palpitations and breathlessness. We believe this will be of use to anyone who may be worried about these symptoms or chest pains and would like information on the possible cause.

In order to understand how cardiac rhythm abnormalities occur and how different treatments can be effective, it is firstly important to appreciate how the normal heart works.

How does the heart work? 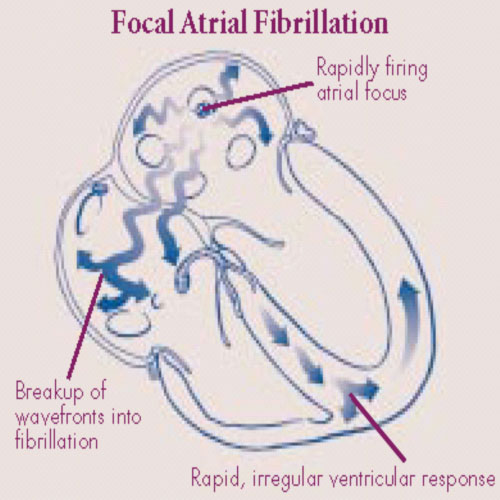 To put it very simply, the heart has only one function and that is to maintain a continuous and adequate flow of blood around the body. Blood is the vehicle for delivering oxygen and nutrition to all the vital organs. Some organs such as the brain are extremely sensitive to deprivation from oxygen and glucose. If there is a disruption to blood supply for more than a few minutes irreversible damage may occur. The heart is a simple muscular pump that contracts every few seconds. There are four cardiac chambers and four major heart valves. Blood flows from the top atrial chambers to the lower ventricular muscular pumping chamber. The heart valves ensure that blood travel in a single direction only.

Like many mechanical pumps the heart is controlled by electrical circuitry. An inbuilt pacemaker (sino atrial node) initiates an impulse that sends a wave of electricity over the muscle to make it contract. The impulse is then passed onto a middle relay station (the AV node), this is normally the only thread of connection to the lower muscular pumping chamber. Specialised wiring divides out into the lower ventricle (His–Purkinje fibres) so that the signal is delivered rapidly and evenly throughout the lower ventricular chamber.

There are many different classifications of heart rhythm disorders (arrhythmias), some are serious and others benign. Some arrhythmias are only found incidentally without the patient being aware of them, but in the majority of cases they cause severe symptoms of palpitations (a sense that the heart is beating abnormally and uncomfortably), breathlessness, occasionally chest pains, dizziness and even blackouts.

Many arrhythmias occur as a result of abnormal focal triggers that disturb the normal rate and regularity of the heart. The net effect is usually to cause rapid inappropriate heart beats that lead to symptoms and potentially complications. Most forms of heart rhythm disorders are now well understood and effective treatments can be offered. In fact a cure for many rapid and abnormal arrhythmias is catheter ablation.

What is catheter ablation? 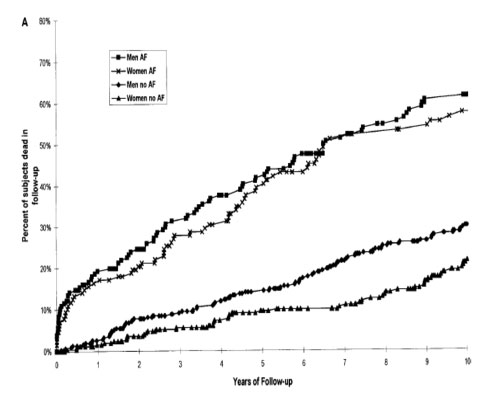 Small long flexible wires (catheters) of only a few millimetres in diameter can be introduced into the circulation, usually through veins or occasionally an artery of the groin. As small vessels lead to bigger vessels, which ultimately drain back to the heart, it forms a route of access to the heart chambers. These custom-made catheters have the ability to both record and deliver electrical signals from the heart. By positioning these catheters in key positions within the heart this allows potential circuit testing to be performed and the source of the arrhythmia to be located. The procedure can be done under either local or general anaesthesia, depending on patient choice and tolerance. The aim of ablation therapy is to locate the origin or most critical part of the circuit that maintains an arrhythmia. Then using high frequency radio waves delivered at the tip of an ablation catheter, heat energy is used to precisely destroy the targeted area and render the arrhythmia non-functional.

Which heart rhythm disorders can be treated with ablation?

Our understanding of how most arrhythmias work is now pretty advanced. Most arrhythmias with a definable triggering source or circuit can now be potentially cured with ablation therapy. Generally arrhythmias are classified as simple if they are easily identified and cured with high success rates with conventional equipment, but complex arrhythmias often require sophisticated mapping systems to work out difficult circuits in detail to eradicate them successfully. 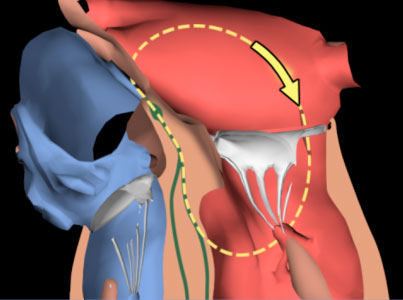 This is the infamous arrhythmia that affected the ex-prime minister Tony Blair. It is quite a common arrhythmia found in 900 patients per million of the population. The circuit revolves around the right atrial chamber continuously with a rate of some 300 times a minute, driving the lower ventricles to follow. It is an arrhythmia quite resistant to drug treatment. Although the circuit can be broken by an electric shock (DC cardio version), there is a very high rate of recurrence, estimated to be about 60% within 2 years despite medication. The condition also has a small stroke risk of 1% annually, which is why patients need to be on Warfarin to thin the blood to prevent formation of clots within the heart chamber. A catheter ablation procedure involves putting a wire up from the femoral vein of the leg and cutting the circuit using heat energy to render the arrhythmia non-functional and effectively give a cure from the problem. This gives a success rate of over 95% and carries a very low procedural risk of 1-2:1000. It is perhaps the simplest of all arrhythmias cures.

This is an umbrella term encompassing several different arrhythmias. Tachycardias are fast-heart rhythm disturbances (the term is derived from the Greek words for accelerated heart). They include accessory pathway mediated tachycardias, AV Nodal re-entrant tachycardia and even atrial tachycardias. They occur in about 1% of the population. The presence of an additional loop of wiring now forms two connections between the atria and ventricles, creating a possible revolving circuit. 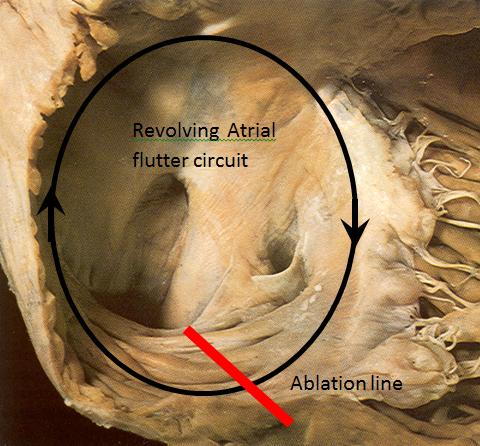 There are some types of connections that can be detected on a resting ECG, called Wolf Parkinson White (WPW) Syndrome, or most others that cannot be seen on a resting ECG. WPW deserves special consideration as there is a small associated danger from developing serious life threatening arrhythmias somewhere between 0.2-2 per cent. Those at risk however cannot be predicted on the basis of an ECG alone. Catheter ablation is highly effective at eradicating the abnormal connection (>95% cure rate) but with an approximate procedure risk of up to 1%. Decision to eradicate the pathway, therefore, is dependent on symptoms, risk assessment and patient preferences.

Other SVT are not life threatening but are unpredictable nuisances. Any patient with a sustained attack needing medical treatment or hospitalisation should be seen by a heart rhythm specialist to be given the option of an ablation. 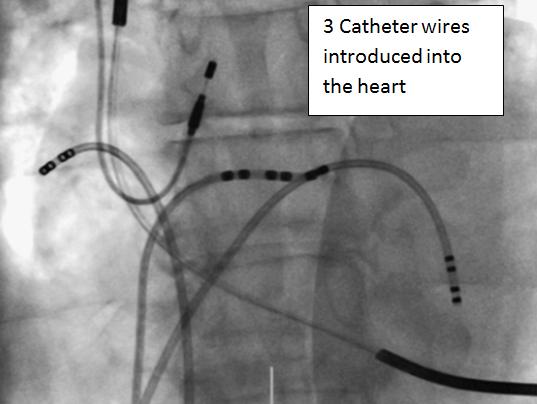 This is a very common arrhythmia affecting <1% of those below 60 years, climbing to 5-10% in their 70s and estimated to be 20% by the time we are all in our 80s. It is therefore a condition of increasing occurrence in older age. It is not an entirely benign condition, as risk of death is doubled in ten years compared to individuals without AF. The main causes of the increased risk are from strokes and heart failure. Identifying individuals at risk and treating them appropriately is therefore of paramount importance.

Physically the upper atrial chambers of the heart is in electrical and mechanical chaos, there are multiple random circuits rapidly wandering around the chamber, bombarding the AV node connection, trying to drive the lower heart chamber to follow. 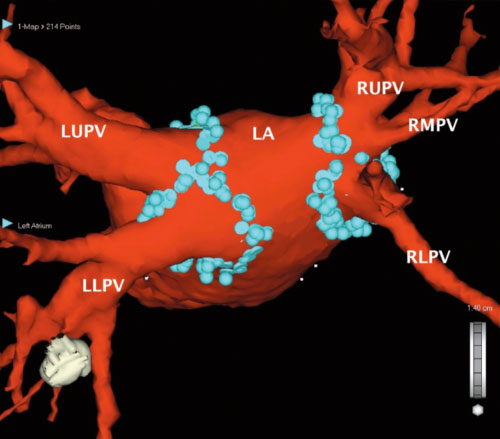 Patients can perceive AF quite differently. Some will be entirely free of symptoms whilst others will be so incapacitated that they struggle to exercise or even walk 50 yards. Typical symptoms include rapid irregular heart beating, dizziness and light-headedness, shortness of breath, reduced ability to exercise, disturbed sleep and concentration, tiredness and fatigue, and even chest discomfort.

Atrial Fibrillation is a very difficult condition to treat. A distinction is made between patients who are in AF all the time (persistent AF) and those with sustained bouts that occur but terminate spontaneously (paroxysmal AF). Persistent AF is seen as the advanced form of this disease and is considered much harder to treat. There is a very high relapse rate in both forms. It is estimated that persistent AF that if corrected has a 60-80% chance of recurring in a year even if given the most powerful prevention drugs. Paroxysmal AF also has a very high relapse rate despite medication. Anti-arrhythmic drugs to try to prevent the AF have varying success in individual patients and a not insignificant proportion of patients will develop side effects from them. 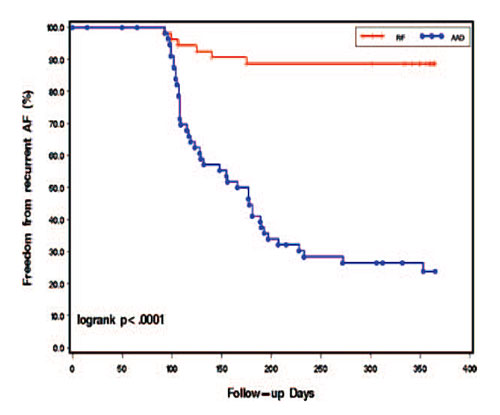 Treatment options for Atrial Fibrillation are divided into rate control or rhythm control.

Rhythm control is more complex. The aim is to restore normal rhythm to the heart and try to prevent AF occurring. There is a high failure rate of drug therapy, and electrical shock treatment can be offered to patients with persistent AF, but again very high percentages of patients revert back to AF within a short time. However, there is now a catheter ablation procedure for atrial fibrillation that can be offered to eradicate the source of the AF and prevent recurrence.

Like previously described ablation procedures catheter ablation is performed by the keyhole approach from the groin. Most patients are offered general anaesthesia, but the operation can be performed under local anaesthesia with strong sedatives and pain killers. Persistent AF patients require more treatment within the atrial chamber, as there are often rapidly discharging focal drivers that perpetuate AF. The treatment involves gaining access to the left atrium, mapping out the areas that trigger off AF and delivering local energy in the form of heat, freezing or laser energy to knock out a small amount of cells to either eradicate or isolate the source of AF.

We now know that the mouths of the pulmonary veins draining from the lungs back to the heart are the key trigger points causing AF and these are routinely targeted for ablation. Additional areas may need further treatment depending if other trigger areas for AF are present. Persistent AF patients require other areas to be treated within the atrial chamber, as there are frequently rapidly discharging focal centres that perpetuate AF. An analogy can be drawn to the “eye” of a storm in a tornado or hurricane, the aim is to knock these out to disperse/stop the storm. The procedure requires very sophisticated mapping systems and cutting edge technology. It should only be done by very experienced specialists who perform high volumes of these procedures regularly. 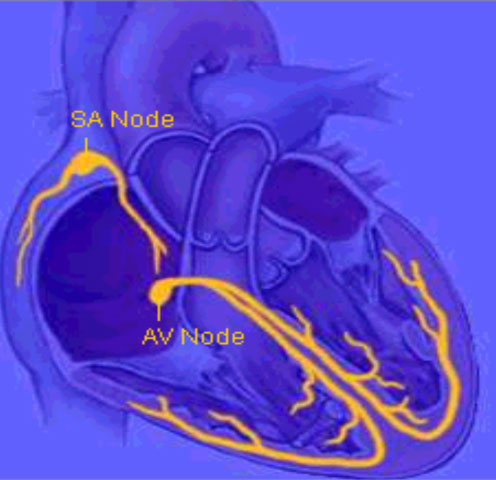 The treatment is complex and associated with some procedural risks. Overall procedural risks are approximately 5% primarily from bleeding complications, however, most of these risks are reversible. But there is a serious risk of up to 1%, including a procedural stroke risk (0.5%) or for needing some form of surgery (0.4%). The risk of death from serious complications should be less than 1:1000. A decision as to whether patients are suitable for AF ablation should be carefully considered on grounds of risk and benefit assessment after consulting a heart rhythm specialist. In a lot of cases if the ablation is a success, the results can be transformational, but this has to be weighed up with procedural risks.

There are also a large number of other heart rhythm abnormalities not covered in this short article due to the limitation of space that can be treated effectively. These include complex focal and scar related atrial tachycardias, grown up congenital heart disease arrhythmias (patients born with very abnormal heart structures that often need surgical treatment) and ventricular tachycardias (from the lower muscular ventricular chamber) with structurally normal and abnormal hearts. Patients should be informed about the implications of their condition, made aware of all the different treatment options, including risks and potential benefits of different treatments to have a tailor made approach suited for each individual.

All heart rhythm patients should be referred to a cardiac rhythm specialist (Electrophysiologist) who will assess them and discuss the most appropriate treatment options. 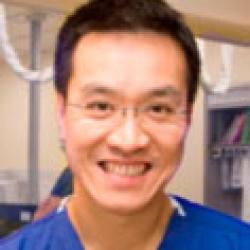