Diabetes is reaching epidemic proportions in both the Western and developing worlds. In 2009 the Quality of Outcomes Framework wrote that there were 2.6 million people in the UK reported to have diabetes. This figure is set to reach 4 million by 2025. Due to the increasing prevalence of obesity, the incidence and vascular complications of type 2 diabetes will continue to rise (The Foresight Report estimates that by 2015, 64% of adults aged 21 to 60 in the UK will be obese, and by 2025 this will rise to 83%).

Nearly 80% of patients with type 2 diabetes suffer from cardiovascular illness, with coronary artery disease (CAD) representing the major component of this disease. Approximately 10–15% of patients admitted to hospital with a heart attack (myocardial infarction) and 20% of patients dying from coronary heart disease (CHD) have diabetes as a contributing factor. In general, diabetic patients have more extensive atherosclerosis with a higher prevalence of multi-vessel CAD and frequent silent heart attacks (without chest pain). Some studies have even suggested that diabetic patients without CAD have the same risk for future cardiac death as non-diabetic patients with established CAD1 (1). Cardiovascular mortality and morbidity appear significantly worse in those with diabetes than those without. Diabetes is therefore placing a large burden on our health care system, both directly and indirectly.

Electrocardiography (ECG) is the first test, and it records the electrical activity of the heart. It is painless and harmless and takes only a few minutes. The exercise ECG entails the patient on a treadmill or an exercise bicycle with leads being attached to the chest that measure how the heart functions whilst exercising. Abnormal ECGs / Exercise ECGs in diabetic patients are associated with a high risk of heart attacks. However, diabetic patients may have peripheral neuropathy which may limit exercise, or result in a poor heart rate response to exercise due to autonomic dysfunction. Thus these tests have poor sensitivity and specificity which make them a poor screening tool. The use of an exercise test alone has led to many false positive tests leading to unnecessary, expensive and invasive coronary angiography tests, in which nearly 50% of the resulting tests were normal. However, the exercise ECG test remains a very useful investigation in good hands. 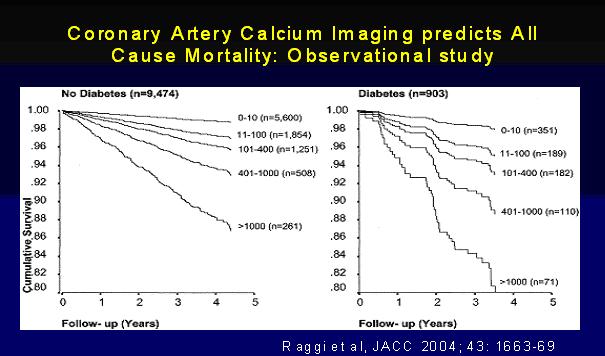 All the office-based screening calculations assess a patient’s 10-year risk of developing coronary heart disease. Over the last few years, coronary artery calcium (CAC) imaging, where a cardiac CT scan reveals information about the extent of hardened plaque in the coronary arteries (atherosclerosis), has been increasingly used to further assess a patient’s risk, particularly those in an intermediate risk category. However, there is a poor correlation between CAC and the degree of narrowing of the coronary blood vessels and its ability to predict which patients will go on to suffer a medical event, although there has been a large amount of data demonstrating its utility in predicting cardiovascular survival over 7 – 10 years. Patients who are without symptoms and assigned to the high-risk group with office-based risk assessment calculations will benefit from intensive risk modification. In asymptomatic diabetic subjects Raggi and colleagues  (2) have shown that mortality rates are significantly higher than their non-diabetic counterparts with similar CAC scores. The possible explanation is probably due to a faster progression of atherosclerosis.

Patients in the low risk group are advised to follow a healthy lifestyle and their risk factors should be treated as and when diagnosed according to current guidelines. Those in the intermediate-risk group pose a clinical dilemma and it is this group of patients who will benefit most from CAC scoring. The management strategy for patients who are classified in the intermediate risk category remains predominantly subjective, therefore using the CAC score gives us a tool to try to re-classify some of these patients into higher or lower risk groups making management decisions easier and more evidence-based.

The above graph shows that for every increase in calcium score there was a greater increase in mortality for diabetic compared to non diabetic subjects. Also for the same calcium score diabetic patients are at a higher risk of death than non-diabetic.

CT Coronary Angiography (CTCA) requires the injection of an iodine-based substance into the patient through a large vein and then x-ray type images are taken. The actual scan time is less than 15 seconds in over 90% of patients. The image quality can be improved with the use of a special spray that is administered under the tongue approximately five minutes prior to the scan and also beta-blockers can be administered to get an ideal heart rate of less than 65 beats per minute.
Clinical role of CTCA
Non-invasive coronary angiography by computed tomography (CTCA) is a new and evolving technique which can accurately image/detect the presence of coronary artery disease (atherosclerosis) inside the heart arteries. Unlike the two-dimensional image of conventional invasive angiography, this technique also allows us to visualise the vessel wall and the plaque itself, and has the potential for plaque characterisation, bringing us a step closer to identifying the characteristics of a vulnerable plaque (plaque prone to rupture), which is the ‘holy grail’ of cardiology. It is able to pick up "silent" disease, which is especially important in diabetic patients.
In order to get high quality diagnostic images of the heart in a reproducible manner, newer scanners such as the Dual-source CT scanner are better suited for imaging the coronary arteries. Through a combination of Dual-source CT-coronary angiography (DS-CTCA) and the measurement of specific biomarkers, which are biochemical substances produced by the body that allow us to measure the progress of a disease, we are able to assess not only the total coronary artery disease plaque burden, but also the ‘stability’ of the plaque and can possibly identify those people who are at a higher risk of rapid progression of the disease.

The Myocardial Perfusion Scan (MPS) is a well-established test which provides important prognostic information to stratify cardiac patients according to their risk. It is a scanning procedure that is able to illustrate the function of the heart muscle (myocardium). There is an extensive body of evidence that has accumulated over the last 2–3 decades regarding the usefulness of MPS, which allows us to see how well blood is reaching the heart muscle through the coronary arteries, in the diagnosis and short term prognosis of coronary artery disease. The limitation of this technique arises from the fact that it is necessary for there to be significant (>50%) narrowing of blood vessels causing relative discrepancies in blood flow to the heart.
MPS cannot, therefore, be used as a primary screening tool. A normal MPS does not provide any information regarding the extent of the plaque burden of the coronary arteries per se. Though MPS accurately predicts the severity of obstructed coronary arteries, it does not directly image the heart arteries as can be done now by new and evolving Cardiac CT technology such as the CTCA.

Despite these advances nearly 50% of patients with coronary artery disease will not receive medical attention before suffering a heart attack that may result in death. This is probably attributable to the fact that nearly two thirds of culprit plaque lesions that are responsible for heart attacks/death are not known to cause any significant coronary narrowing (>50% stenosis) and are identifiable by current CTCA techniques. 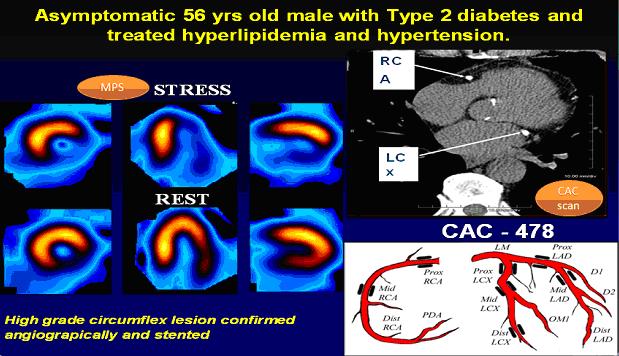 These pictures show how well new technology guides us in making the best decisions on the management of patients. A 56 year old gentleman known to have diabetes, hypertension and hypercholesterolaemia was without any symptoms but underwent a Coronary Artery Calcium (CAC) scan as part of initial screening; this revealed a high calcium burden (CAC - 478). So we arranged for him to have a Myocardial Perfusion Scan (MPS) that demonstrated a significant compromise in blood flow to the heart muscle. He was then successfully treated with invasive coronary angiogram and stent insertion. Click on image to enlarge

The NICE (National Institute for Health and Clinical Excellence) Guidelines relating to “Chest Pain” (April 2010) have provided clear-cut guidelines regarding the use of cardiac CT (both calcium imaging and CT coronary angiography) in combination with Myocardial Perfusion Scanning when required. We recently concluded a large clinical trial (RADICAL) to assess the clinical and cost-effectiveness of Dual-source CT coronary angiography in patients from three NHS hospitals referred to the chest pain clinics. These patients are recruited at the NHS site and then sent to the Wellington Hospital for CTCA and MPS (if needed). The DS-CTCA is combined with Myocardial Perfusion scanning when intermediate narrowing of the coronary arteries is noted on the CTCA to guide management strategies.
Interim results are very encouraging and suggest that:

In summary, diabetic patients have a four times greater chance of developing silent coronary artery disease compared to the general population. By 2020 there will be over 400 million diabetics worldwide, 70-80% of whom will suffer cardiovascular problems and coronary artery disease is estimated to become the number one killer worldwide (according to the World Health Organization). It is therefore imperative that methods of early detection of coronary artery disease are established to combat this growing threat. 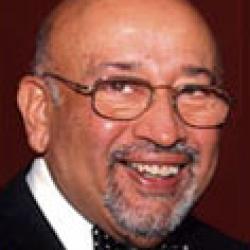 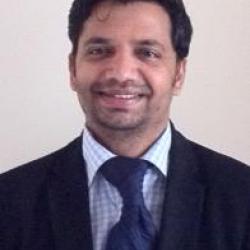 Restrict eating in a 10 hour window

The small weight gain that can be so dangerous

How mindfulness can lower the risk of diabetes

How Alex Reid discovered the truth about his training

What a body scan REALLY tells you