Primary and Secondary Brain Tumour - and the Treatment Options

It is now well recognised that patients with brain tumours do best if their care is managed by a group of doctors, both medical and surgical, who have a particular interest in the management of brain tumours. This is known as a tumour Multidisciplinary Team (MDT). All patients with brain tumours should receive highly individualised care that delivers not only the best treatment possible for the patient but treatment that is appropriate to the patient’s and family’s psychological and emotional needs.

The headaches are related to raised pressure inside the brain. The classical description is of early morning headaches, often over the forehead, which is present when the person wakes up. The headache usually settles by the afternoon. Many patients also complain of nausea or vomiting.

Any neurological deficit will depend on the site of the tumour. The most common deficit seen is a weakness (frontal tumour). Some patients may have numbness (parietal tumours), problems with speech (dominant temporal tumours), visual problems (temporal, parietal or occipital tumours) or a change in personality (frontal tumours). Certain tumours present in a very specific fashion, i.e. endocrine problems with a pituitary tumour.

Seizures (epileptic fits) occurring for the first time in an adult must be investigated with an urgent scan. The types of fits seen in patients with tumours vary from classical grand mal seizures where the patient loses consciousness, shakes, may be incontinent and bite their tongue, to focal seizures which may cause a temporary loss of function. In patients with a tumour in the movement area they may lose movement in one arm for a short period of time which then spontaneously recovers.

The astrocytomas are the most common primary brain tumours seen in adults. They arise from cells in the brain known as astrocytes, which function to nourish and support the brain cells. There are no known risk factors for these tumours, and although they occur across all age ranges, they are more likely to be highly malignant in the older population.

Both tumour type and grade have an important impact on survival. The type and grade of a tumour is confirmed by assessing biopsy specimens under the microscope (histology). Astrocytomas are classified from World Health Organisation (WHO) Grade I to WHO Grade IV tumours. Whilst Grade I tumours require only surgical treatment, Grade IV tumours may require radiotherapy and chemotherapy in addition to surgery.

The treatment of brain tumours depends on many variables. The location, size and extent of the tumour will often determine which treatment may be most beneficial. Younger patients and those who are generally well (self caring) have a better outcome than older patients or those who have neurological deficits.

There are no hard and fast rules for the treatment of these tumours and each patient's treatment is individually tailored to his or her needs. The rationale for surgery may vary from one patient to another, as may the use of radiotherapy or chemotherapy.

These are also classified as primary brain tumours though in fact they come from the lining of the brain. When small they can often just be monitored or treated with radiosurgery (see below) without the need for open surgery. Most medium-sized or larger meningiomas will require open surgery and this is best done by neurosurgeons who specialise in the treatment of brain tumours and who have access to the latest techniques including image guidance, a computerised navigation system which guides the surgeon precisely to the tumour.

The role of surgery may be diagnostic or therapeutic. Some patients may not be suitable for surgery.

The location and extent of a tumour may make it unsuitable for removal, in which case a biopsy may be performed to confirm the diagnosis. A biopsy removes a small piece of the tumour so it may be examined under the microscope. When performing a biopsy it is vital to use image guidance or a stereotactic frame as it is undoubtedly the safest way to perform a brain biopsy.

If the tumour is in a relatively "silent" part of the brain or if it so large that it is causing symptoms or raised pressure in the brain, it may be debulked. The aim is to safely reduce the volume of the tumour. A craniotomy is performed with image guidance or with the help of a stereotactic frame. For primary malignant tumours the aim should be to use the latest fluorescent tumour-labelling techniques (Gliolan©) to ensure the most effective tumour removal possible and instill intratumoral chemotherapy (Gliadel Wafers©) at the time of surgery if possible.

In many ways this is like GPS in the operating theatre. A highly detailed scan is obtained just prior to surgery which is then processed to produce a 3D image of the patient’s brain and skull that the surgeon uses to guide them precisely to the tumour location. This helps to reduce the risk of brain injury and increases the possibility of complete tumour removal. The technique also allows for the incision on the scalp to be as small as possible. Like all such advanced techniques this is best done by someone with extensive and frequent experience.

Gliolan is a dye that is taken as a drink several hours prior to surgery and in specially selected cases allows the surgeon to see the tumour light up as bright red using a microscope fitted with a special filter. This technique significantly increases the chances of complete tumour removal which has a direct effect on survival. Only those surgeons who have been specifically trained to use this technique are allowed to perform such operations.

In those cases where a primary brain tumour has been successfully removed it may be desirable to perform chemotherapy at the time of surgery to ensure maximal survival benefit for the patient. This is done using biodegradable wafers impregnated with chemotherapy that slowly dissolve once inserted into the cavity left following tumour removal. The national guidelines are very clear in the UK that such an operation should only be performed by a neurosurgeon who spends 50% of his or her time treating patients with brain tumours.

When appropriate, patients are treated using the latest radiotherapy and chemotherapy techniques. All patients regardless of the treatment they receive have ongoing follow up under the auspices of the MDT to ensure the best possible outcome for both patient and family.

This is a technique that uses highly focused beams of radiation to destroy a tumour or an abnormal knot of blood vessels. The treatment is thus performed without the need for open surgery and is usually given as a single outpatient treatment.

Only certain tumours are suitable for radiosurgery and any decisions concerning radiosurgery are best made by a group of surgeons and oncologists with considerable experience in the area.

The Gamma Knife© has the advantage of being a well-established and studied technique but it requires that the patient’s head is fixed in a frame with pins to ensure accuracy. The need for a frame (which can be uncomfortable) and the fact that most of the spine cannot be treated using the Gamma Knife© are potential disadvantages of the technique.

The CyberKnife© has the disadvantage of being a less well-established and studied technique but does not require that the patient’s head is immobilised and is able to treat lesions in the rest of the body, outside of the head including the spine.

From a biological standpoint, both treatments have an identical impact on the tumour and appear to be equally effective. For this reason, in ideal circumstances a doctor offering such treatments should have access to both modalities of radiosurgery.

Thanks to the ever increasing survival seen in patients with cancer, effective treatment of tumours that have spread to the brain has now become vital and again it is well recognised that such tumours are best treated by neurosurgeons who specialise in the treatment of tumours. All modalities of treatment ranging from a biopsy, open surgery, to whole brain radiotherapy and radiosurgery are considered.

Although brain tumours are rare in childhood, they are now the commonest solid cancer seen in children in the UK. There are 300 new cases in the UK every year. To achieve the best outcome for both the patient and their family, care must be delivered by a team of dedicated paediatric neurosurgeons, oncologists and paediatricians. The London Neurosurgery Partnership has assembled such a team from across the leading centres of paediatric cancer care across London.

If there is any question of a neurological problem in a child then a CT and MRI scan is mandatory. For babies under six months the scan can be done under oral sedation. Beyond six months children will need a general anaesthetic (GA) for a scan and from 6–12 years old one may be able to MRI the child without any sedation or GA.

The scan will reveal the tumour, its location, its size and any associated hydrocephalus.

The brain and spine are hollow and contain fluid known as cerebro-spinal fluid (CSF). The cavities in the brain containing the fluid are known as ventricles.  This fluid also surrounds the brain and spine. The CSF protects the brain from impact on the skull and also nourishes the brain. The adult brain produces around 500 ml of fluid per day, however the capacity for the fluid in the brain is only 125 ml. Thus the fluid is produced and circulates around the brain and then is reabsorbed into the blood. The brain keeps the situation of fluid production and re-absorption in balance so that there is a constant amount of fluid around the brain. Any mechanism which disrupts this balance can cause too much fluid within the brain. This is known as hydrocephalus. In general terms hydrocephalus can occur when too much fluid is produced, the circulation of fluid is blocked, or not enough fluid is reabsorbed into the bloodstream. This condition tends to be most common in children because the tumours that occur in children tend to grow next to critical parts of the fluid chambers. 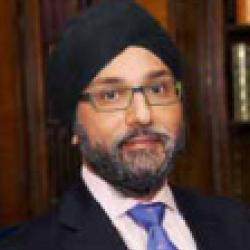 What is most symptomatic: the hydrocephalus or the tumour?

END_OF_DOCUMENT_TOKEN_TO_BE_REPLACED
Related articles by Mr Ranjeev Bhangoo
What can Modern Neurosurgery Treatments be used for?

Paediatric Neurosurgeon
What can Modern Neurosurgery Treatments be used for?