This article describes the anatomy of the knee and outlines the most common types of knee injury, such as a twist or a sprain, and the usual treatments.

Anatomy of the Knee 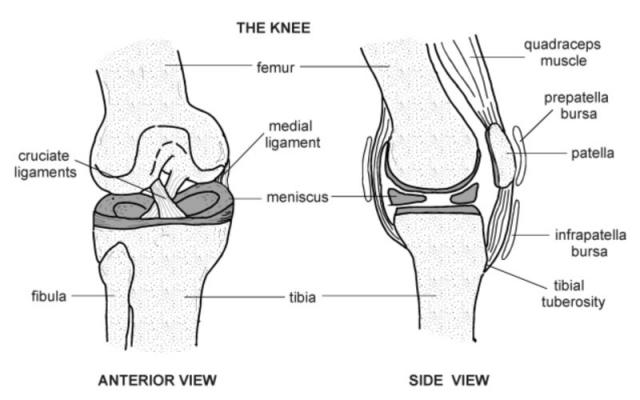 We are all familiar with our knees, and have an idea as to how they work. The knee is essentially a hinge, which allows a little rotation. It is actually three separate joints in one. There is the inner (or medial) half, the outer (or lateral) half and the kneecap (patello-femoral) joint. The joint surfaces are covered in a slippery white cartilage (which you can see next time you have a chicken drumstick) and are lubricated by the joint’s natural oil, (called hyaluronic acid).

Stability is maintained by four major ligaments. (A ligament is a biological cord that joins two bones together; a tendon is a cord which joins a muscle to a bone). The medial collateral ligament (MCL) is a broad band running down the inner (medial) side and the lateral collateral ligament (LCL) is a cord running down the outer (lateral) side. The collaterals control side to side stability. Inside the joint are the two cruciate ligaments, anterior (ACL) and posterior (PCL). These provide forwards and backwards and rotational stability.

The knee also has two shock absorbers, called the menisci. These are like the segments of an orange, crescent shaped and triangular in section, and rest on top of the shin bone (tibia) on either side. Because they are made of fibrocartilage (gristle), they are often referred to as ‘the cartilages’.

Injury to the Knee

An injury can be recent (acute) or long standing (chronic). Injuries happen in many ways. The joint can be jarred, twisted, forced from one side or the other, or a combination of all three. The soft tissues, joint surfaces or bones can be injured depending on the strength of the tissues and the deforming force.

What is a torn cartilage?

The menisci can be damaged if exposed to an excessive force. Usually it is the medial meniscus (the one on the inner side of the knee) that is injured, less so the lateral. The typical injury is a twisting force on a flexed (bent) knee. In contact sports such as soccer, rugby and hockey, this is a quite common injury, although it may occur in other sports, most notably skiing. As we age, so the menisci degenerate. Less force is then needed to tear the meniscus, and a typical method of injury is twisting whilst crouching down.

Although meniscal injuries are mostly associated with young footballers, at least half of my patients with torn menisci are over forty, so this is not the preserve of the young. The typical symptoms are of pain following a twisting movement. There may be a snap or click heard, and the knee may give way. Most people are usually able to hobble afterwards, but often experience loss of extension (‘locking’) and flexion. The knee may swell, and if there is associated ligament injury, there may be bruising.

Once the swelling starts to settle, gentle mobilisation can be started. If the swelling fails to settle, full movement remains elusive, and the joint does not feel right, then your GP or physiotherapist may seek an opinion from an orthopaedic surgeon. Once examined, X-rays or an MRI scan may be requested and treatment (usually an arthroscopy) recommended. A torn meniscus can be repaired, but is more usually trimmed to give a stable edge.

What is a sprain?

This is a widely used and much misunderstood term. A sprain is damage to a ligament, a strain refers to damage to a muscle or tendon. A sprain may consist of light bruising (grade I), partial rupture (grade II) or complete rupture (grade III) of a ligament. The latter may be less painful than the former because the fibres in a ruptured ligament are not under any tension.

The commonest sprains are those of the medial collateral ligament (MCL) and are usually a grade I or II. The typical mechanism is a blow from the outside causing a ‘knock knee’ type injury. The symptoms are of pain and swelling. There is rarely a sensation of instability, and the ligament almost always recovers without surgical (or medical) intervention. Initial treatment also consists of the RICE regimen.

Again, once the swelling starts to settle, gentle mobilisation can be started. With more severe sprains, physiotherapy is often very useful in restoring function. If there is a degree of instability, then a specialist opinion should be sort. Your specialist will almost certainly recommend a support brace, (which may allow limited movement) to be worn for six weeks.

Injuries to the lateral collateral ligament (LCL) are much less common. Other adjacent structures (the postero-lateral corner) may be involved. A complete rupture will require surgical repair, but if you have injured you knee to this degree, you will have sought medical advice due to the severe swelling and inability to weight bear. Injuries to the LCL are more likely to be partial and treatment will follow the same pathway as for the MCL.

The posterior cruciate ligament is probably the least often injured, and very rarely requires surgery, most injuries being treated with a rehabilitation programme.

Of all the knee ligaments it is the anterior cruciate ligament which is most likely to lead you to an orthopaedic surgeon. Many of you may remember the FIFA World Cup during which Michael Owen ruptured his ACL and tore a meniscus. As many of my patients have remarked, he was on his own, with no players nearby.

There are three principal mechanisms of ACL injury:

An ACL rupture may be partial or complete. It is a serious injury and should not be underestimated. There is often a pop or snap heard at the time of injury. If you are playing a sport, you will need to be helped from the pitch, or if skiing, off the mountain side. Again, initial treatment consists of the RICE regimen, followed by investigation (X-Rays and/or MRI scan) and appropriate treatment. Usually other injuries will be treated first, e.g. a period in a brace for an MCL sprain.

Physiotherapy is also recommended to help reduce swelling and increase mobility. Once the knee is mobile, your specialist will re-examine your knee to assess stability. If the joint is stable, then further physiotherapy may be recommended. It used to be taught that the ACL was incapable of healing. However those of us who treat these injuries routinely are aware that the injury may be partial and that some degree of healing is often present.

Surgical Reconstruction of the Knee

If your knee remains unstable, then a surgical reconstruction is likely to be recommended. My youngest patient was 13 years old, my oldest 62 years old, so the age range is wide. The majority of my patients undergoing this operation are in their twenties and thirties. The operation is performed arthroscopically (i.e. by keyhole surgery) through a few small incisions, commonly using hamstring tendons to reconstruct the ligament.

Postoperatively a six to nine month rehabilitation programme is undertaken to restore full function. Do remember that although your surgeon can reconstruct your ligament, rehabilitation and exercise is down to you! Most people who have sustained this injury lose a sporting season before their knee is fit enough to be subjected to the full rigours of the chosen sport. It is worth remembering that the injury that ruptured the natural tendon, if repeated, can rupture the reconstructed one. Most of graft failures are due to a re-injury on returning to sport.

Most wrenched knees usually result in a relatively benign ligament sprain which settles with a little TLC. More severe injuries can result in torn menisci or ligaments which may result in surgical intervention. If an injury fails to settle within a few days, or your knee feels unsafe and pain fails to settle, you should seek advice from your GP or physiotherapist, who will refer you to a specialist should the need arise. 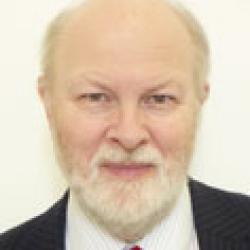