Deep Vein Thrombosis
This article discusses the diagnosis and treatment of Deep Vein Thrombosis, a common circulatory condition. This will be of help to anyone with symptoms such as swelling or pain in the leg who would like further information on how to prevent, or treat, DVT.

What is Deep Vein Thrombosis?

Deep Vein Thrombosis (DVT) is when a blood clot known as thrombus develops in the deep veins, primarily of the legs and pelvis. It is a condition that requires urgent medical attention to prevent further complications such as a life-threatening pulmonary embolism (PE) or permanent long-lasting damage to the leg veins, known as post-thrombotic syndrome.

Common symptoms include localised pain or tenderness within a calf or thigh muscle, usually associated with ankle and calf swelling.

Blood clots in deep veins can grow in size, break loose, and then travel through the bloodstream to the lungs resulting in life-threatening pulmonary embolism (PE). Symptoms relating to PE include breathlessness, chest pain, palpitations, increased heart rate and coughing.

The most commonly used tests to diagnose DVT are an ultrasound scan of the veins in the affected limb, known as a venous duplex scan, and a sensitive blood test (D-dimer). Specialist scans such as MRI or CT Venograms could be used for more detailed images of the clot, especially in the pelvic area; these are also used to plan endovascular treatment. Extremely rarely, special x-ray Venograms are performed for diagnostic purposes.

A contrast dye needs to be administered intravenously in order to perform CT or x-ray Venograms and there is a small chance of an allergy to the contrast used. If you are known to have an allergy to contrast, you will not be able to have this type of scan. Similarly, if you are known to have impaired kidney function, the amount of contrast used may have to be altered to avoid causing further damage.

The most common treatment for DVT is primarily with drugs that thin out the blood. These drugs are known as anticoagulants.

This treatment usually entails injections of heparin which act immediately, whilst oral warfarin is started and the level stabilised. Warfarin works by combatting the vitamin K in the body which is used for blood clotting. It is usually started by giving a loading dose for three days and then using blood tests to stabilise the right dose over the next few days to weeks. Contrary to popular belief, blood thinners (anticoagulants) do not actively dissolve the clot, but instead prevent new clots from forming. Over time, the body itself will dissolve the clot.

Treatment with Warfarin aims to treat the symptoms of the DVT i.e. pain and swelling, as well as prevent small parts of the clot breaking off and travelling to the lungs thereby causing a life-threatening PE. As the medication works against the normal clotting function of the body, patients are advised that they may bruise more easily than normal.

Rarely if the clot is too big, it may have to be dissolved with other drugs injected directly through a catheter in to the clot (catheter-directed thrombolysis) or even removed in a minimally invasive way, which is called endovascular mechanical thrombectomy. This involves placing a thin catheter through the vein, into the clot itself. Water jets from the catheter break up the clot before the small pieces are sucked into the catheter and removed from the body.

If necessary, any narrowing in the vein that might lead to future clot formation can be identified and treated with a balloon or stent placement. This is again performed using a thin catheter placed into the vein. A stent, which is a metal cage, is placed over the catheter and expanded using a balloon to widen narrowed areas.

In a small group of high risk patients, a minimally invasive operation is needed to place a filter in the large vein above the blocked leg vein. The aim is to stop any blood clots from travelling up to the lungs. This may be considered if anticoagulation cannot be given (for various reasons), or if it fails to prevent clots breaking off and travelling up into the larger veins and to the lungs.

Treatment with oral Warfarin is usually for 3–6 months. On occasions, treatment can extend to 9–12 months or even longer. When the treatment is first started, you will have a blood test to check your INR level every day. Once your level is in the ideal range and the dose of Warfarin has stabilised you will have the INR check twice a week for a few weeks. Following this, a blood test will be performed every six weeks until the end of treatment. Follow-up is organised based on local set-up arrangements.

1. How quickly will it take for the leg swelling to go away?

It can take some time before leg swelling completely resolves. Compression stockings can be supplied to help this process and you should keep the leg elevated when at rest.

3. Am I able to travel whilst being treated for DVT?

Yes. There is generally no contraindication to travelling. The same advice for long haul flights will apply - you should do foot exercises whilst sitting and walk in the aisle when safe to do so. Use of compression stockings can also be helpful. If you need to travel soon after you have been diagnosed with a DVT, arrangements will need to be made for INR monitoring to ensure you take the correct dose of Warfarin.

4. Is it possible to develop another DVT whilst being treated?

If the correct dose of Warfarin is given and the INR is in the target range, it is very rare for this to happen.

5. What are the side effects of Warfarin?

The most important side effect of Warfarin is bleeding. Warfarin works by slowing down the clotting time of blood, therefore there is an increased chance of bleeding with minor injuries. Other side effects include rash, headaches, hair loss and abnormal liver function.

6. Are there any newer medications available with fewer side effects?

A new blood thinning medication, similar to Warfarin, has recently been approved. However, the medication, (known as Pradaxa®) is currently only licensed for the prevention of blood clots in patients with irregular heart beats and NOT for the treatment of DVT/PE.

7. Can a DVT increase the risk of having a heart attack or stroke?

Generally not. DVT’s affect the deep veins whereas a heart attack or stroke involves the arteries. In patients who have a hole in the heart allowing the venous and arterial systems to mix, there can be an increased risk of this happening.

For further information on the author of this article, Consultant Vascular and Endovascular Surgeon, Mr Constantinos Kyriakides, please click here. 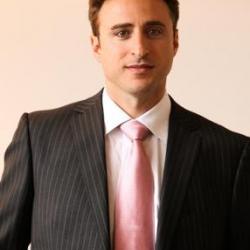 Hospital blood clots – VTE is the collective term for DVT