Vaccination against the Human Papilloma Virus

Human Papilloma Virus
The HPV vaccination programme amongst young girls in the UK has been the source of contention and debate. This article will help advise those girls offered the vaccine, as well as their parents and carers, whether it is the right course of action for them to take.

About 3,000 women are diagnosed with HR HPV-associated cervical cancer every year in the UK. Most women infected with HR HPV do not go on to develop cervical cancer. But for some, infection with HPV can go on to cause changes in the cervix, which, if undetected and untreated, may develop into a cancer.

The Human Papilloma Virus (HPV) or Wart Virus as it is more commonly known, is a family of viruses that can infect humans. The viruses are divided into subtypes according to their characteristics. There are over 100 subtypes of HPV. Most do not cause significant disease in humans. However, some subtypes, notably types 16 and 18, 31 and 33, have been confirmed as agents which cause cervical cancer. These subtypes, known as 'high risk' HPV (HR HPV), have been found to be present in close to 100% of all cervical cancers. Of the different types of HPV, types 16 and 18 cause about 7 out of 10 (70%) cancers of the cervix. Most of the remaining 30% of cervical cancers are associated with other HR HPV types. 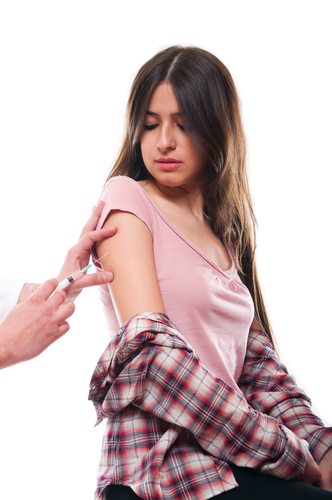 These vaccinations offer protection against HR HPV, reducing the chance of women going on to develop cervical cancer.

NB: The vaccinations do not protect against any other sexually transmitted infections and are not a contraceptive.

There are two aspects to consider when assessing the safety of a vaccine. The first is whether it provides sufficient protection against the virus (effectiveness) and the second is whether there are any unacceptable side effects associated with receiving the vaccine (safety).

Several research studies have investigated the effectiveness of the two available HPV vaccines.

A trial testing Gardasil® called FUTURE II reported its results in October 2005. 12,000 women aged between 16 and 26 years participated in the trial. These women did not have HPV infection before the start of the trial. The women were divided into two groups. Half the women were given Gardasil® and the other half had a dummy vaccine (placebo). Both groups of women had 3 injections of either the vaccine or placebo over six months. Over the following two years the women had regular checks to see if they had got HPV, or had any changes to the cells of the cervix, which could develop into a cancer (pre-cancerous changes). The group who had the vaccine showed no precancerous changes. Of the 5,258 women who had the placebo, 21 had precancerous changes, which is 0.4%. The researchers found that Gardasil protected against HPV types 6 and 11, as well as 16 and 18.

Cervarix® has been similarly tested. A study called ‘PATRICIA’ (PApilloma TRIal to prevent Cervical cancer In young Adults) was for women under 26. It involved over 18,000 women from all over the world, including the UK. Another study was for women of 26 and over. The trials found that Cervarix® was useful in preventing HPV infection. Cervarix® was licensed in the UK and the European Union in 2007 for the prevention of precancerous changes in the cervix in girls and women between the age of 10 and 25. The vaccine is 99% effective in preventing the cervical abnormalities that can lead to cervical cancer caused by HPV types 16 and 18.

As with most vaccines, the most common side effect is mild to moderate swelling, redness and pain at the site where the injection is given. Other mild side effects, such as slightly raised temperature, sickness, dizziness, diarrhoea and muscle aches have been reported.

Up to the end of 2011 side effects occurring in around 10-15% of vaccine doses include:

Other common side effects occurring in less than 10% of doses include:

Very rarely, some people have an allergic reaction soon after immunisation. This reaction may be a rash or itching affecting part or all of the body. The nurse will know how to treat this. It is not a reason to stop having HPV vaccinations. Guillain-Barré syndrome (GBS) has been reported after vaccination with Gardasil®. GBS is a rare neurologic disorder that causes muscle weakness. It occurs in 1–2 out of every 100,000 people in their teens. A number of infections have been associated with GBS. There has been no indication that Gardasil® increases the rate of GBS above the rate expected in the general population, whether or not they were vaccinated.

Even more rarely, people can have a bad reaction, within a few minutes of the injection usually, with breathing difficulties and collapse. This is called an anaphylactic reaction (anaphylaxis or anaphylactic shock). These are extremely rare and the nurse or doctor is trained to deal with vaccine anaphylactic reactions. Individuals recover completely with treatment, usually within a few hours. It is not possible to reliably estimate how frequently severe side effects may occur. This is because the information about them is received from people reporting the side effects themselves, rather than in controlled, clinical tests.

Signs of an anaphylactic reaction include:

An analysis published in 2009 found there had been 1,340 reports in total, associated with HPV vaccination, with 2,891 different adverse effects noted. Most were minor complaints such as rashes, swelling on the injection site, pain or allergic reactions.

However, some more significant problems were reported. Four girls had convulsions, and there were some reports of paralysis and blurred vision. However, these severe effects are extremely rare when considering that over 700,000 girls were vaccinated in 2008. It illustrates the importance of having the vaccine administered by a trained healthcare professional who can deal with side effects if they arise. Reports of deaths associated with the vaccine have not been substantiated.

In the UK, girls in year 8 at school (aged 12 to 13) are offered the HPV vaccine. The vaccine the Government has chosen to use is Cervarix. Girls have three injections over 6 months given by a nurse. A letter about the vaccine and a consent form is sent to the parents of the girl before she has the vaccine. It is up to her whether she has the vaccine. A two year 'catch up' programme also started in Autumn 2008, to vaccinate girls aged between 13 and 18.

The vaccination is licensed for women up to 26 years of age. It is possible to have the vaccination privately for women outside the groups being offered free NHS vaccinations. The cost for private treatment varies from doctor to doctor.

This research means that if girls take up the vaccination the programme will prevent at least 7 out of 10 cancers of the cervix and possibly even more in the future. But it takes between 10 and 20 years for a cancer to develop after HPV infection. So any benefits in reducing cervical cancer will not be seen for quite a long time. However, the number of cases of pre-cancerous changes in the cervix  will fall quite rapidly.

Cervical Screening after the HPV vaccine

Girls will still need to attend for cervical screening when they become eligible, even if they have had the full vaccination course. This is because the vaccines do not prevent infection with all types of HPV. Also from the research so far, the vaccines may not prevent cervical cancer in women already infected with HPV. So it is very important to remember that women will still need cervical screening (smear tests) for many years to come.

Cause of mouth cancer linked to gum disease

Link between HPV infection and skin cancer in men