Cervical Cancer
Cervical cancer is a preventable disease; early diagnosis and treatment is successful in the majority of cases. This article will be of help to any women who would like to know what screening involves and how a diagnosis of cervical cancer is made.

Vaccination for HPV is thoroughly recommended in most cases. For information on getting yourself vaccinated – click here.

The cervix is the lower part of the womb. It is sometimes referred to as the neck of the womb. Cervical cancer, is the second most common cancer in women world-wide, second only to breast cancer and in some developing countries, it is the most common. An estimated half a million women are diagnosed with cervical cancer each year, approximately 80% of whom are in the developing world. About 300 thousand women die of this condition every year.

In countries like the United Kingdom, cervical cancer has become a lot less common. This is because there is a National Screening Programme which aims to prevent cervical cancer. Experts predict that cervical screening saves up to 4,500 lives a year in England, and up to 5,000 a year in the UK as a whole.

Cervical cancer is known to be caused by the Human Papilloma Virus. Human papillomavirus (HPV) is the name of a group of viruses that includes more than 100 different strains or types. More than 30 of these viruses are sexually transmitted, and they can infect the genital area of men and women including the skin of the penis, vulva (area outside the vagina), or anus, and the linings of the vagina, cervix, or rectum. Most people who become infected with HPV will not have any symptoms and will clear the infection on their own.

However, certain strains of HPV, known as High-Risk HPV, can cause normal cells on infected skin or mucous membranes to turn abnormal. Most of the time, you cannot see or feel these cell changes. In most cases, the body fights off HPV naturally and the infected cells then go back to normal. If a high-risk HPV infection is not cleared by the immune system, it can linger for many years and turn abnormal cells into cancer over time. About 10% of women with high-risk HPV on their cervix will develop long-lasting HPV infections that put them at risk for cervical cancer. Nearly all cervical cancers are related to HPV, but most genital HPV infections do not cause cervical cancer. In research studies, most people who test positive for genital HPV DNA test negative later on, often within 6 to 12 months. Smoking reduces the chances of clearing HPV, thus increasing the chances of an abnormal smear.

There is no treatment for the virus itself, but a healthy immune system can usually fight off HPV naturally. However, there is now a vaccine that can prevent HPV infection.

HPV vaccination was introduced into the national immunisation programme in September 2008, for girls aged 12-13 across the UK. Then, starting in autumn 2009, a two-year catch up campaign vaccinated all girls up to 18 years of age.

When the HPV vaccination programme began in 2008, women over the age of 18 were not vaccinated as it was not cost effective in preventing cervical cancer. This is because as soon as a woman becomes sexually active, she is at risk of infection with the virus.

It will be many years before the vaccination programme has an effect upon cervical cancer incidence so women are advised to continue accepting their invitations for cervical screening.

How common is cervical cancer?

In the UK overall, two out of every 100 cancers diagnosed in women are cervical cancers. But it is the second most common cancer in women under 35 years old. Added to this, about 24,000 women have a severely abnormal cervical screening result every year.

What are the symptoms of cervical cancer?

The most common symptom of cervical cancer is bleeding from the vagina at other times than when you are having a period. You may have bleeding:

Doctors call pain related to sex 'dyspareunia'. There are many other conditions that cause these symptoms. Most of them are much more common than cervical cancer but you should go to your doctor straight away if you have any of these symptoms. You probably don't have cancer, but if you do, the sooner you are treated, the more likely you are to be cured and usually the less treatment you will need to have.

How is the cervical cancer diagnosis made?

Cervical cancer can be detected in two main ways: 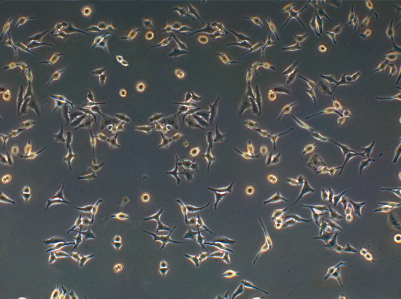 1. Through an abnormal smear

A small proportion of women with abnormal smears will be found to have an early cancer when a biopsy is taken. This is known as a screen-detected cancer. Most screen-detected cancers are very early and completely treatable as, by definition, they are discovered before a woman develops symptoms.

All women presenting with abnormal bleeding or any of the other symptoms described above are referred for urgent investigations. If, on examination, the cervix appears abnormal, a biopsy is taken to confirm the diagnosis of cancer.

Screening for prevention of cervical cancer

Screening (cervical smears, cytology) is possible because we understand a lot about how cervical cancer develops. Cancer of the cervix usually takes many years to develop. Before it does, the cells in the cervix often show changes, known as cervical intra-epithelial neoplasia (CIN). This precancerous cell stage is also sometimes known as dyskaryosis. If left untreated, CIN can develop into cervical cancer. However, the majority of women with CIN do not develop the disease.

Screening (smears, cytology) works because these early changes can be detected and fully treated, thereby preventing progression to cancer. It is important to understand that cervical screening is not a test for cancer but for abnormalities which, if left undetected and untreated, may develop into cancer. Early detection and treatment can prevent 75 per cent of cancers developing.

Who is invited for cervical screening?

Within the NHS Cervical Screening Programme in England, women aged 25 to 49 are invited for free cervical screening every three years, and women aged 50 to 64 every five years. Women over 65 are invited if their previous three tests were not clear or if they have never been screened.

The NHS call and recall system invites all eligible women who are registered with a GP. It also keeps track of any follow-up investigation, and, if all is well, recalls the woman for screening in three or five years time. It is therefore important that all women ensure their GP has their correct name and address details and that they inform them if these change.

Women who have not had a recent test may be offered one when they attend their GP or family planning clinic on another matter. Women should receive their first invitation for routine screening at 25. It is important that you attend for screening when you receive your letter. The doctor or nurse will explain the process to you before obtaining your sample.

What does screening involve?

The first stage in cervical screening is taking a sample from the cervix for analysis. A doctor or nurse inserts an instrument (a speculum) to open the woman's vagina and uses a spatula to sweep around the cervix. Most women consider the procedure to be only mildly uncomfortable. It only takes a few minutes. The sample is then sent to a specialist laboratory where it is examined and the result of the examination is communicated to your doctor.

If your result is normal (very low risk of having a pre-cancerous abnormality) you will be asked to re-attend for screening in three to five years, depending on your age and screening history.

If the test is abnormal (high risk of having pre-cancerous changes in your cervix), you will be referred to a hospital to see a specialist for a procedure called colposcopy.

You may be referred for colposcopy if your screening test is abnormal. This is not unusual: about one in ten tests are abnormal. Colposcopy is a simple, quick and generally painless examination that allows the doctor to see the type and area of the abnormality on your cervix. It also lets the doctor decide if you need treatment.

For some women the changes in the cervix return to normal by themselves. Other women will need some simple out-patient treatment that is virtually 100% effective. 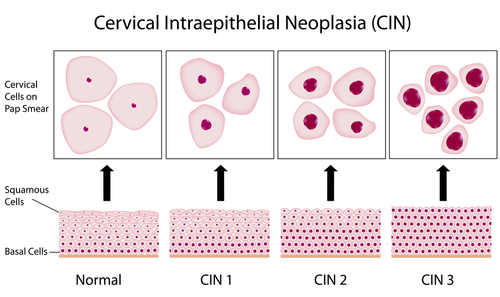 The instrument used is called a colposcope and is really just a large magnifying glass which lets the doctor look more closely at the changes on your cervix. The actual examination only takes about 15 minutes. If, at colposcopy, the doctor finds areas of abnormality on your cervix he/she may take a biopsy which is a small sample of tissue, sent to the laboratory for analysis. This test will describe the extent of abnormality, known as CIN (cervical intraepithelial neoplasia.)

CIN 1 means that only a third of the cells in the affected area are abnormal. These may be left to return to normal or may be treated, depending on your doctor's opinion.

CIN 2 means that up to two-thirds of the cells in the affected area are abnormal. Treatment will usually be needed to return the cells to normal.

CIN 3 means that all the cells in the affected area are abnormal. Treatment will be needed to return the cells to normal.

Only very rarely will a biopsy show cell changes that have already developed into cancer. Surgery and more extensive treatments are generally used to treat cervical cancer. There are several equally effective methods available to treat CIN. The aim of all methods of treatment is to destroy all the cells affected by CIN, with the minimum of disruption to normal tissue.

The choice of treatment will depend on your particular case, on the preference of the doctor doing the colposcopy, and on the methods available at the clinic. Most clinics offer a procedure called a large loop excision of the transformation zone (LLETZ). This involves using a small loop-shaped electrical wire to remove the tiny area where abnormal cells arise. It is done under local anaesthetic in the majority of cases and is very well tolerated.

An abnormal proliferation of cells

One dose of HPV vaccine sufficient to prevent cervical cancer

MPs call for smear tests to be offered to younger women