New research on over 300,000 people by the University of Glasgow and published in BMC Medicine shows that regular spirit and beer / cider drinkers are at higher risk of death, major cardiovascular events, liver cirrhosis and accidents/self-harm when compared to those who drank red and white wine, after adjusting for the amount of alcohol consumed overall.

Social scientists and researchers have long been interested in alcohol and the ways in which drinking norms, trajectories and experiences are shaped by different aspects of our identity, including our gender.

Perceived wisdom always states that it is better to eat food with alcohol, but can this statement be proved? 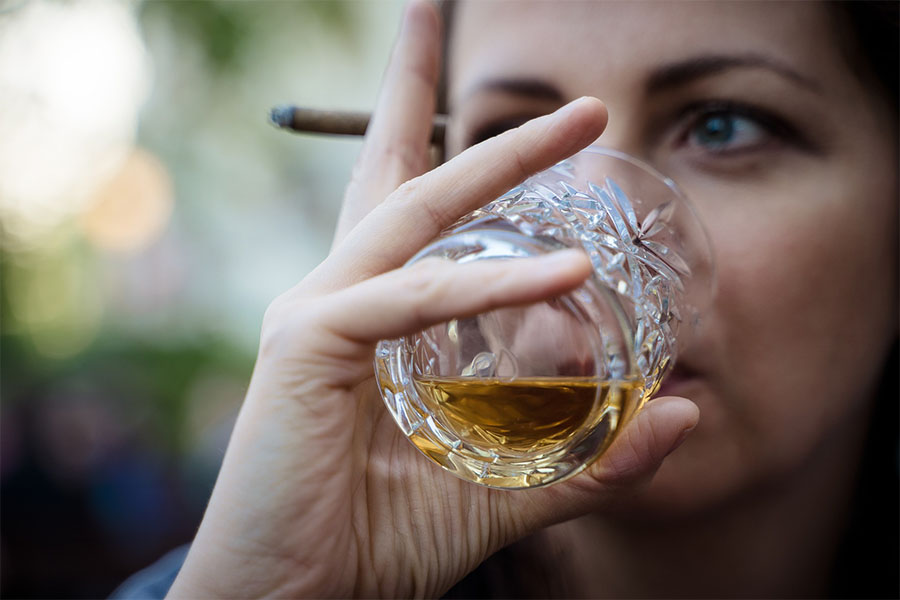 Just how important is it to eat when drinking?

Comparing adults who consume alcohol regularly found that the pattern of alcohol consumption mattered. These patterns included factors such as the following:

The above are associated with a lesser risk of alcohol-related negative health outcomes - including death.

Similarly, drinking alcohol without food was associated with a 10% higher adjusted relative mortality and cardiovascular risk when compared to alcohol consumed with food in similar average amount.

It's about the pattern of alcohol consumption as well as the amount.

The results also showed that spreading alcohol consumption over three to four days in a week was associated with lower adjusted relative mortality, cardiovascular and cirrhosis risk than consuming alcohol daily; and lower mortality and cardiovascular risk than binge drinking similar amounts of alcohol.

Guidelines should include pattern of consumption as well as amounts

Alcohol consumption is one of the leading risk factors for death, and heavy drinking is associated with a higher risk of cancer, major cardiovascular events and injuries. Current guidelines focus on recommended daily and weekly average amounts of alcohol consumption; however, recommendations on the pattern and type of alcohol are not available.

The study used data from over 309,000 people from the UK Biobank, excluding people who abstain from alcohol, infrequent consumers of alcohol or those with past experience of certain health conditions.

Participants who consumed predominantly spirits were found to have a significantly higher adjusted relative risk of all-causes of death (25%), major cardiovascular events (MACE) (31%) and liver cirrhosis (48%) when compared to predominantly red wine drinkers. Beer/cider drinkers were also found to have a significantly higher relative risk of these health outcomes.

Once or twice weekly alcohol consumption was associated with a higher adjusted relative risk of death (9%) and MACE events (14%) compared to participants drinking alcohol over three to four days in a week. However, participants drinking alcohol daily, or almost daily, were found to have a higher adjusted relative risk of liver cirrhosis.

Dr Bhautesh Jani, Clinical Senior Lecturer in General Practice at the University’s Institute of Health and Wellbeing, said: “In this study, we wanted to understand the relationship between different alcohol consumption patterns and health risks among those who consume alcohol regularly".

“Of the regular alcohol drinkers we studied, less than half reported consuming the recommended amount for low risk alcohol consumption, so our first suggestion would be for regular drinkers to follow the recommended government guidelines. Other ways to further lower the alcohol consumption related health risks, based on our findings,  might be to spread consumption over the course of three or four days – whilst being careful not to increase their overall intake – and consider opting for red or white wine and drinking with meals where possible.”

The study, ‘Association between patterns of alcohol consumption (beverage type, frequency and consumption with food) and risk of adverse health outcomes: A prospective cohort study,’ is published in BMC Medicine. The study is funded by the fellowships from NHS Research for Scotland and Medical Research Council.