Eating disorders at Christmas - could someone you know have orthorexia? 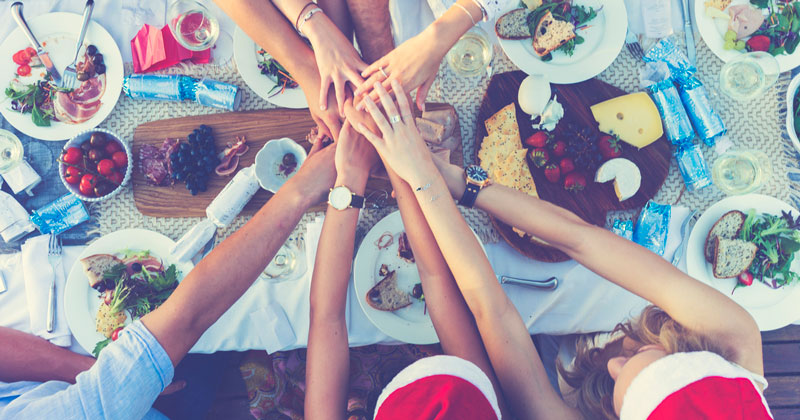 Experts say that the obsession with clean eating is creating a new kind of eating disorder. Could orthorexia affect someone in your family?

Most of us adore Christmas. It’s a time of festivity and food – the kitchen table heaves with mouth-watering fare. You can feast on smoked salmon starters, before enjoying a helping of succulent turkey, with all the trimmings. Then there's Christmas pudding, or perhaps a slice of chocolate yule log for afters. The fizz flows, along with the laughter and chat. Christmas is all about blissful indulgence. However, if you have an eating disorder or emotional issues around food, the chances are, this season evokes rather different feelings.

There will be a lot of families affected by eating disorders this Christmas - a study by the charity BEAT, revealed that 725,000 people in the UK suffer from such an illness. It’s estimated that 10% of those with an eating disorder are anorexic, around 40% bulimic. The rest fall into a non-specified group of eating disorders, which include bulimia and binge eating. Experts reckon this figure could mask an even bigger number. Specialists in eating disorders have identified a new category – orthorexia. According to Stephanie Moore, a Clinical Nutritional Therapist and an expert in eating disorders, orthorexia is becoming a commonly used term to describe someone who has an unhealthy obsession with eating healthy food.  She says: ‘Although not yet officially recognised in the medical world, doctors are beginning to acknowledge this as a potentially serious issue that is affecting predominately teenagers and young adults.’

You probably know someone who could be at risk of orthorexia. The person who really cares about the quality of their food. They’re worried about the salted caramel panettone. Is it organic? Gluten-free? Does it have any additives in it? The fact orthorexia has emerged at the same time as the move to ‘clean eating’ is probably not a coincidence. ‘Orthorexia often starts as a genuine desire to become healthier,’ says Stephanie Moore. ‘Sometimes there is a weight loss incentive, but the overriding focus is that everything consumed must be ‘clean’; that is, free of additives and preservatives, that the food is ‘natural’, often needing to be organic and unprocessed.  Further requirements might be that all food is dairy-free, sugar-free, gluten-free and/or free of all animal products.’

This new type of eating disorder is closely linked to the surge in use in social media. Many fitness bloggers have spoken out about how their simple desire to get healthier then transformed into a far more worrying mode of behaviour. It went very wrong for Emilie Layla Lovaine, a health blogger who had more than 40,000 followers and regularly got over 200 likes after she posted a picture of her healthy food on Instagram. She has described how she would spend hours making raw-chocolate bites and cold pressed juices, and then artfully style them for Instagram shots. But instead of enjoying the treats, the blogger would just end up throwing the food away. When Lovaine found herself unable to force a spoonful of Weetabix down, she knew she needed some help. Lovaine’s problems were so severe, she was referred to an eating disorders clinic. She has written on her blog: ‘For any of you that maybe struggling or feeling overwhelmed with food and exercise, just know help is out there. Reaching out to your GP, friend or loved one is the first step.’

The dangers of orthorexia

Is orthorexia dangerous? According to Stephanie More, the answer is yes. ‘An orthorexic person will feel panicked and desperate if they cannot eat and exercise within their rules. If this extremely controlled behaviour endures for longer than a few weeks, it can result in numerous health complications.’ There are, however differences to anorexia nervosa, which has the highest death rate of all mental disorders. ‘Unlike anorexia, where patients are often at a critically low body weight and want to avoid eating altogether, orthorexics may not be underweight,’ explains Moore. ‘They are willing to eat regular meals but are often greatly restricting quantities of certain food types, such as starchy carbohydrates and/or fats. The danger comes more in the malnourishment and mental anguish that inhibits healthy function.’

Getting help for eating disorders

With family and friends coming together for meals, if it becomes apparent that any of your loved ones (or even yourself) have issues with food, it’s vital to get medical and psychological help. Anorexia nervosa and bulimia can be extremely dangerous. As well as the sadly very real possibility that an eating disorder can lead to death, sufferers are also more vulnerable to developing infertility problems and osteoporosis in later years.  Orthorexia poses a more tricky issue, because of the subtle way it manifests its self. ‘An experienced nutritional therapist, ideally with counselling and/or health coaching experience would be able to offer this guidance,’ advises Moore. ‘Someone suffering with this condition needs to seek on-going professional support to break these patterns of obsessive behaviour and to find a more comfortable balance with food, exercise and body image.’

Addiction Specialist
The Diagnostic and Treatment Guide by William Shakespeare