Neck lumps have many causes but, thankfully, the majority are benign. However, a number of benign lumps will still need to be assessed, partly to rule out the possibility of anything more sinister being behind them but also in case surveillance or surgery is required.

To simplify the different possible diagnosis I tend to divide neck lumps into the following common categories:

Lumps arising from lymph nodes in the neck

Thankfully the majority of lumps arising from lymph nodes are benign. Lymph nodes are part of the immune system. They are often described as being reactive as they enlarge in response to infections or inflammation in the head and neck region. The most common reason for a lump in the neck arising from a lymph node is an upper respiratory tract infection (including pharyngitis and tonsillitis) but they can also occur as a result of inflammation from scalp dermatitis or psoriasis.

Unfortunately, malignant lymph node lumps do also occur and this must be considered if a lump arising from a lymph node is getting progressively bigger or is associated with other upper respiratory or digestive tract symptoms such as ear pain, hoarseness and difficulty or pain on swallowing. Risk factors for head and neck cancers such as smoking and alcohol intake must also be enquired about as these raise the level of suspicion. These lymph nodes urgently require a sample of cells to be analysed so that an almost immediate diagnosis can be made.

Malignancy of the lymph nodes in the form of lymphoma also occurs and should be thought of for anyone with a progressively enlarging lymph node. These patients often require a needle biopsy of the lymph node or a formal removal for diagnosis and then a referral on to a specialist haematology-oncology team.

The two most common congenital lumps include a thyroglossal duct cyst and a branchial cyst. 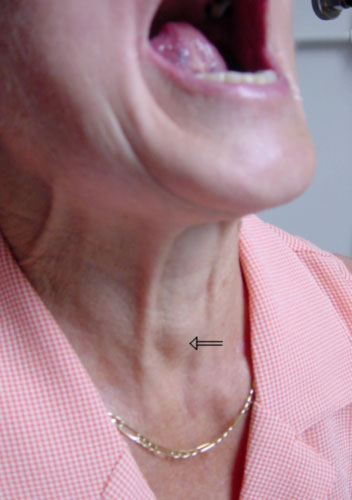 A thyroglossal cyst forms in the remnant of the duct that is formed whilst babies are developing in the womb as the thyroid gland moves from the back of the tongue to the lower part of the neck. These cysts typically form a neck lump that is just off centre, often around the hyoid bone level. The hyoid bone is horse-shoe shaped and it anchors the tongue. They can cause an acute infection and therefore they are red, painful and cause discomfort on swallowing. These can become a recurrent problem and often are visibly obvious. Surgical approaches to these must be thorough so as to remove all aspects of the cyst, the duct and the mid-portion of the hyoid bone in order to reduce recurrence.

These cysts are usually seen in the first two decades of life often in association with an upper respiratory tract infection. They may seem just like lymph node lumps but sometimes they can expand to a significant size. They are always sited high in the neck, tucked under the long muscle in the side of the neck that runs from the throat to behind the ear (the sternocleidomastoid muscle). These can be very troublesome and can cause repeated infections. However, the removal  can be extremely difficult as they lie on top of the internal jugular vein and carotid arteries, which carry blood to and from the brain and alongside a number of very important nerves in the neck. 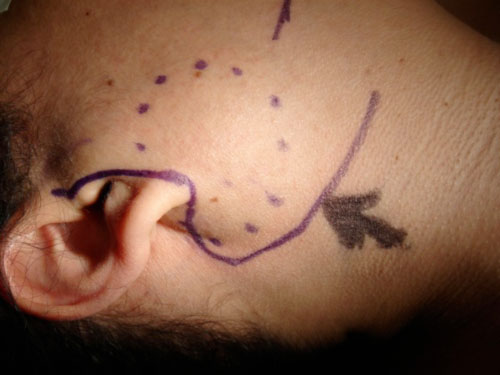 The majority (90%) of lumps in the parotid gland are benign and of these the majority (80-90%) are a common benign tumour called a ‘pleomorphic adenoma’. These do require to be assessed as they still have a small malignant potential and will probably grow. As they are easier to remove when they are smaller it is sensible to discuss the pros and cons of a surgical approach to them as early as possible. Surgery is often in the form of a parotidectomy, where the facial nerve that supplies the muscles of the face is located and preserved whilst the tumour and part of the parotid is removed. This should be done by a surgeon who regularly performs this procedure as damage to the facial nerve can leave patients with a weakness that is visually obvious for the rest of their lives.

Malignant parotid tumours are thankfully rare but their symptoms are rapidly enlarging parotid swellings, pain and even facial nerve weakness. 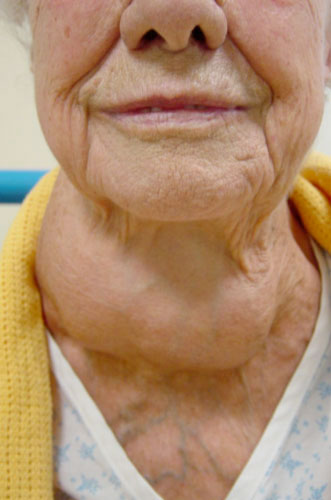 A swelling of the thyroid gland is often referred to as goitre. The majority of swellings and lumps in the thyroid gland are completely benign. Thyroid cancer itself is extremely rare. A lump in the thyroid does however require investigation so that a diagnosis of a benign swelling can be made. Ultrasound and fine needle aspiration are used after a full clinical history and examination have been undertaken. Often a repeat fine needle aspiration will be undertaken a few months after the first to completely confirm that the thyroid lump is benign.

Surgical removal of the thyroid gland may be undertaken for the following reasons:

There are many different causes of head and neck lumps. Fortunately, the majority of neck lumps are benign, however in order to reach a correct diagnosis it is essential for patients to be evaluated by an appropriate specialist team of doctors. Having been evaluated by the appropriate team the patient will either be reassured and offered appropriate advice on any further steps that may be required or, alternatively, they will commence their journey down a cancer pathway that can be steered by the team in the neck lump clinic. Rapid processing and early detection and treatment will help with the overall outcome for all patients with neck lumps.

A Visual Guide to Lumps and Bumps 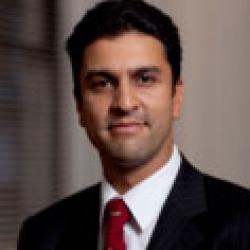 Maintaining Healthy Blood Cells Could Be Key to Fighting Leukaemia

Fearing a recurrence of lymphoma