A test result for COVID-19 appears to mean little other than a massive cost to the tax payer.

Update 26th July 2021; CDC issue a 'lab alert' to announce the withdrawal of the CDC SARS-CoV-2 PCR test. Although labs have months to transition and validate new testing kits.

It seems that the original paper - now referred to as the 'Corman-Drosten' paper, and published by Eurosurveillance, that purported to have discovered a new test for COVID-19 (or SARS-COV-2) was fatally flawed. Indeed, the paper published in January 2020 was flawed to the extent that the authors did not even have any virus to actually test their new test against. Begging the question - how did they know it worked?

Twenty two independent researchers and scientists have subsequently come together to peer-review this paper (not previously peer-reviewed), and have published the following review (which is peer-reviewed);

The review states: "The paper itself already signifies that a large number of false positive results are generated by this test, even under controlled laboratory conditions, making it completely unsuitable as a reliable virus screening method".

The report goes onto state:

"In light of our re-examination of the test protocol to identify SARS-CoV-2 described in the Corman-Drosten paper we have identified concerning errors and inherent fallacies which render the SARS-CoV-2 PCR test useless".

Just in case this is not sufficiently clear, the report goes onto say:

"The decision as to which test protocols are published and made widely available lies squarely in the hands of Eurosurveillance. A decision to recognise the errors apparent in the Corman-Drosten paper has the benefit to greatly minimise human cost and suffering going forward. Is it not in the best interest of Eurosurveillance to retract this paper?".

A load of laboratory artefact

Many scientists have been reporting for some time the problems associated with this PCR test. PCR stands for polymerase chain reaction which describes how just one molecule can be replicated in order to produce enough of it to detect. The Berkely scientist himself who invented the PCR method back in 1985, Kary Mullis, was concerned how this type of test can be abused and the results misinterpreted (deliberately or otherwise).

A recent article published by PANDA (Pandemics - Data & Analytics) asks: Could it be that reports of Notifiable Infectious Diseases (NOIDS) - being filtered by the need for symptoms to gain the attention of GPs - are actually a more representative measure, at least in terms of trends, of “real” COVID-19 than PCR testing?

This is a gargantuan discrepancy and requires further investigation

This question was posed against the observation that, Public Health England’s (PHE) ​notifications of infectious diseases​ (NOIDs) data had only 87 COVID cases listed for the week beginning 9th November compared with 145,129 cases reported on the g​overnment dashboard​ using another PHE data source. This is a gargantuan discrepancy and requires further investigation.

As part of the investigation, the public clearly need to be told what the limitations of the diagnostic testing system are, and why this PCR test is so prone to producing false positive results - in particular. It increasingly looks at this point as though the whole basis for making major policy decisions is based on meaningless data.

Petition to release data on these wrong testing results

The dangers of crying "wolf" 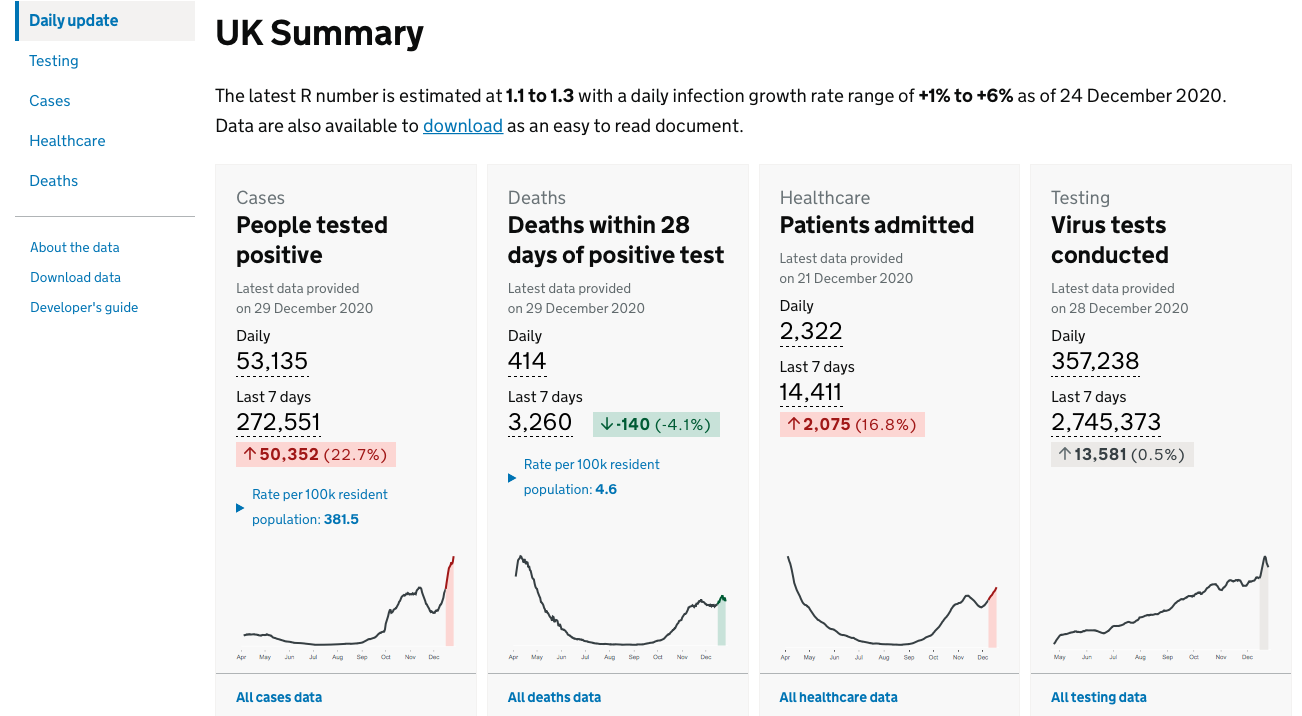 It is now abundantly clear as to why the government needs to provide the full report and not just the artefact provided in the daily UK summary (see pic). It is somewhat like a story from Peter and the Wolf, and the real concern is that when a major pandemic with a genuinely provable 'R' rate with dire mortality across all ages does hit us, the population is likely to respond in the same way as they did in the story.

Testing times for our children

The UK Medical Freedom Alliance (UKMFA) have written an open letter in response to the government press releases on 15th and 17th December, outlining a policy of mass-testing of all secondary school children before they can return to school in January 2021.

the UKMFA have sent a fully referenced Open Letter to Gavin Williamson, DfE and DHSC to outline their "concerns relating to informed consent, the validity of the tests and the lack of evidence for asymptomatic spread of SARS-CoV-2.