Fussy-eating is down to nature not nurture 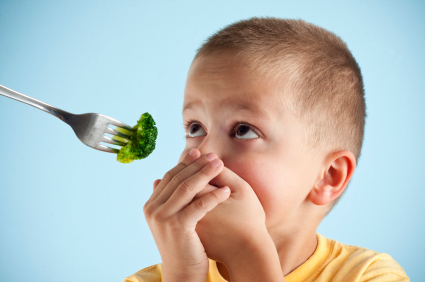 Fussy-eating and a refusal to try new foods are heavily influences by a child’s genetic makeup, new research suggests

They found that fussy eating, where children are overly selective about food, could be explained partly by genetics and partly as a result of environmental factors. But where a child refused to try new food, a trait called food neophobia, only 22 per cent was due to the environment.

The rest was genetic, suggesting that a parent is battling the genetic make-up of their children each time they attempt to introduce a new food.

Fussy-eating genetic but can be changed

“Establishing a substantial genetic influence on both of these traits might be quite a relief to parents as they often feel judged or feel guilty for their children’s fussy eating,” said Andrea Smith (UCL Health Behaviour Research Centre), who jointly led the research.

“Understanding that these traits are largely innate might help to deflect this blame.”

However, the researchers said that although food fussiness has a strong genetic basis, this does not mean that behaviour cannot be changed.

“Genes are not our destiny,” said Dr Clare Llewellyn, of the UCL Health Behaviour Research Centre and lead researcher for the study.

“We know of many traits with a strong genetic basis that can nevertheless be changed, such as weight.

“It would be useful for future research to identify the important environmental shapers of food fussiness and neophobia in young children so that they might be targeted to reduce these behaviours.”

Holly Harris of the UCL Health Behaviour Research Centre and Queensland University of Technology, Brisbane, Australia, said: “Having a child who refuses to eat most foods can be very distressing for a parent.

A logical next-step is to work with parents to address their concerns, and develop strategies to best respond to a child’s fussy eating to encourage future food acceptance.”

The research was published in the Journal of Child Psychology and Psychiatry.

Inequality is a public health risk