Inequality is a public health risk

Life expectancy in the UK is relatively high, but perhaps not as high as you’d expect. According to data gathered by 2015 in the CIA World Factbook, the UK’s life expectancy is only the 33rd highest out of those measured. Some of the countries ahead of the UK do not even have full public healthcare systems, although the vast majority do. The UK is ahead of the United States, at 48, which does not possess a free healthcare service, but behind Canada, at 18, which does. 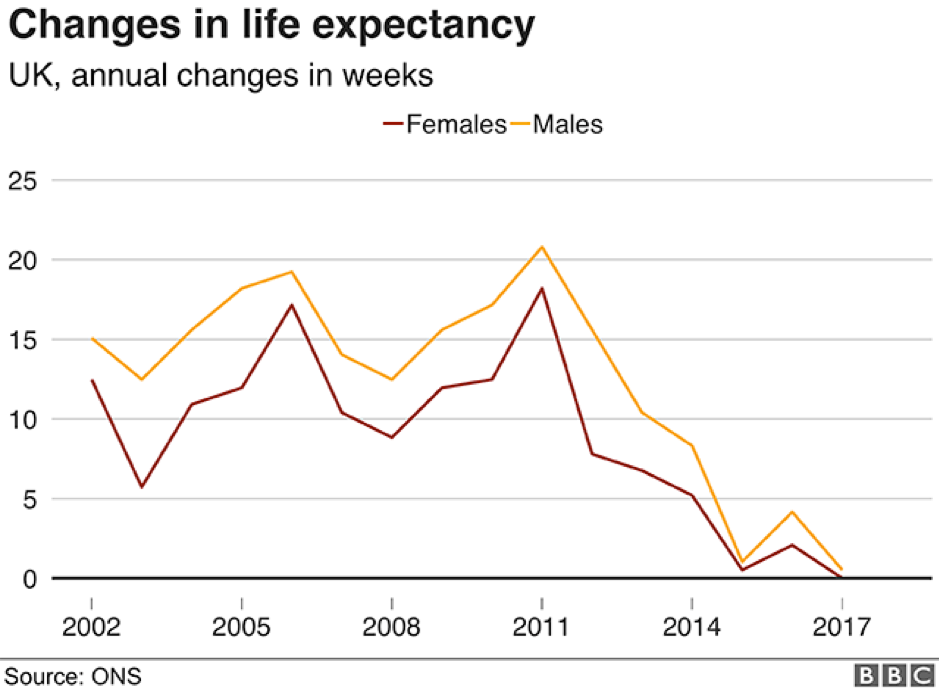 Life expectancy at birth in the UK did not improve between 2015 and 2017. For some sections of the population – males and females in Scotland and Wales, and males in Northern Ireland – life expectancy actually declined between these years.

What the factors are is hotly disputed. One possible candidate is austerity. A study in 2017 suggested that a spike in deaths of elderly patients could be attributed to slower hospital discharges resulting from a lack of available accommodation and care for patients returning from hospital.

Another BMJ study in 2017 found that changes to provisions for health and social care may be linked to an excess of mortality, particularly in care homes.

There were a number of responses to this study. Dr Richard Fordham, Senior Lecturer in Health Economics at the University of East Anglia said that other explanations are available for changing rates in mortality.

He says, “Patient cohorts may have changed (for example more end-stage, longer-term illnesses); patients may have succumbed to different or new diseases (eg. MRSA, cirrhosis etc.); or had greater multiple morbidities (asthma plus diabetes plus cancer etc.) than similar cohorts of the same age before them…”

Prof. Martin Roland, Emeritus Professor of Health Services Research at the University of Cambridge pointed out that the correlation does not mean causation.

Prof Roland says, “This study presents the classic problems of interpreting observational data. The data are highly complex, with a number of possible explanations (known and unknown) for the change in mortality. Certainly the recent change in previous trends of reducing mortality is of concern. However, the authors overstate the certainty of this link to funding and are highly speculative about the money needed to ‘save lives’ in future.”

The King’s Fund, a national health think-tank, said that two things are indisputable.

“The first is that the slowing of mortality improvements is principally the result of changes in mortality among older people. Put simply, more older people – particularly older women – than expected given historical trends are dying. The second is that flu contributed to excess deaths in some years, notably 2015 and also in 2017, although the scale of its impact is disputed.”

There were spikes in deaths during the winters of 2014-2015 and 2016-2017 which have been linked to the prevalence of a particular strain of ‘flu virus. See - Spikes in deaths linked to flu

While in many European countries, ‘flu prevention was affected by austerity, in the UK vaccination coverage levels actually increased during this time. See - Increase in flu vaccination cover.

Therefore, the relationship between austerity and lower life expectancy cannot be proven. What is clear, however, is that inequality plays a large role in determining life expectancy across the UK.

How does inequality plays a large role in determining life expectancy across the UK?

In certain parts of the country, life expectancy has not only slowed in growth, it has actually decreased. Between 2011 and 2016 life expectancy among women in the poorest 20% of society declined by three months. (https://www.theguardian.com/society/2018/nov/23/life-expectancy-falling-for-women-in-poorest-areas-of-england)

According to the King’s Fund, inequalities in life expectancy have been widening.

The difference in life expectancy between the most and least deprived areas of the country was about nine years for males and seven for females. The difference in time spent in poor health was greater still, with females living eighteen more years in better health, and males fifteen.

So, while we unlike the USA possess a free healthcare programme, while we also have such a wide gap between the richest and the poorest in our country, it is reasonable to expect us to continue lagging behind other European and developed nations with less pronounced income gaps.

Life expectancy in the UK has been growing steadily since 1850.  It is not yet clear whether the downturn starting in 2011 is a trend or a blip. However, it must be concerning for anyone not wishing to see the progress made in public health since the industrial revolution beginning to reverse. Since there are such vast differences in life expectancy between most and least deprived parts of the country, we will need to begin to view inequality as a risk to public health.

How the pandemic is proving to be a catalyst for change

Is the Pfizer COVID vaccine safe or not?

The facial feature that INCREASES the spread of coronavirus

5 surprising things that may help protect against COVID-19