The patient had been suffering from severe lower urinary tract symptoms (LUTS) caused by an enlarged prostate. This detailed feedback is intended for the benefit of anyone else who might also be suffering from prostate symptoms and is seeking a preferred treatment option.

"The flow rate has reduced to a controllable stream rather than a torrent and I have had no leakages".

A sudden increase in PSA

I became concerned about my prostate following a sudden increase in my PSA reading from 5 to 13. I was at the time a full time  professor at Newcastle University coming up to retirement age. I had an examination of my prostate in the Urology Dept at the Newcastle Freeman Hospital which indicated I had an enlarged prostate. This was then followed up by a proper biopsy on my prostate at Gloucester Royal Infirmary when I moved to Gloucestershire shortly after my retirement. No cancer was shown up. I followed it up with a CPA3 test at the Spire Hospital in Bristol, which confirmed there was no cancer. My consultant urologist Mr Okeke then put me on several tablets: finasteride, tamulosin and oxybutynin to shrink my prostate and relax the bladder. I also had 6 monthly blood tests to keep an eye on my prostate PSA levels.

The tablets seemed to work initially but over a period of several years their effectiveness wore off. It meant that I had difficulty urinating, very poor flow with frequent trips to the toilet along with uncontrolled leakages. My sleep was frequently interrupted with visits to the toilet 4 or 5 times a night.  My flow rate was very weak, with an uncontrollable urgency to urinate along with frequent leakages. These had become more frequent and embarrassing, my trousers and underwear smelling of urine. I put myself down on the list for a TURPS op on the NHS where however the waiting list seemed to be increasing to infinity, with no chance of having the operation done in an acceptable time. I in fact waited 18 months with no date for a TURPS in sight and realised that the only way to solve the problem was to have the TURPS OP done privately. During that time my wife read an article in a daily newspaper on PAE and how effective it was, that the operation could be carried out in a day with no side effects and relatively painless.  It was much better all-round than having a TURPs.

Referred for PAE by the consultant urologist

My consultant Mr Okeke referred me Mr Mark Harris in the Urology Dept at Southampton General Hospital which is one the major centres where PAEs are carried out along with TURPs and other prostate related procedures. After an initial consultation I had a detailed series of urodynamics tests to measure my urine flow rate and bladder function. My IPSS total score was 22 which meant my prostate problems were severely symptomatic. Following a discussion with Mr Harris on the results, and best way to proceed, Mr Harris thought the best and most successful way forward was a PAE to be carried out by Dr Nigel Hacking consultant interventional radiologist in the Radiology dept. in Spire Hospital Southampton. I was encouraged by the fact that Dr Hacking is a pioneer in the development of PAE.

The procedure was carried out in due course depending on Dr. Hacking’s availability. The whole procedure took place over a 2 day procedure, the first day taken up with the initial MRI investigation of the network of arteries surrounding the prostate and their suitability for embolisation, followed by a second day where the actual embolisation was carried out. I was given a local anaesthetic and whilst he was carrying out the delicate embolisation procedure, Dr Hacking talked me through procedure showing me what arteries he had identified as suitable for injecting the little glass beads.

The whole operation took less than an hour and following a brief discussion with Dr Hacking, I returned home. I texted Dr. Hacking on my progress over the next 5 months. At the beginning I had hardly any flow at all but that gradually improved until at the end of it, the flow was a torrent rather than a trickle. It was so great I could not control it, and there were frequent leakages, far worse than they had been before, so much so that I regarded the PAE as  a failure. I filled in the PPS score with a lack of enthusiasm.

Having returned my completed IPPS score in advance, I returned to Southampton to find out in detail what progress, if at all, had been made since the embolisation 5 months previous. This began with an MRI scan of my prostate which was then examined by Dr Hacking. I was greeted in fact by Dr Hacking saying "I’m so glad you filled in the IPPS. It has been most useful.’" He told me that the embolisation had reduced the size of my prostate by nearly 50% and that the embolisation as far as he was concerned, had been a total success. He showed me the MRI scan results and where the shrinkage of my prostate had occurred. I was most surprised because the uncontrollable releases and leakages were worse than before the operation. Dr Hacking then said,” it’s not a prostate problem anymore but a bladder problem”.

My bladder can’t control the flow rate, it’s in a constant state of tension. I do recall Mark Harris saying the bladder will have to be re-educated after the PAE. Dr Hacking then said there are some tablets you can take to relax the bladder called oxybutynin. I replied that those were the tablets I was prescribed for my prostate but had stopped taking them for a couple of weeks prior to the embolisation. He suggested I start taking them again which I have ever since, twice a day.

The improvement has been dramatic

The improvement has been dramatic. The flow rate has reduced to a controllable stream rather than a torrent and I have had no leakages worth commenting on, no more trouser and underpants smelling of urine. I can go for much longer periods without the urgency to urinate. I wake in the night at most once to relieve myself and now get a good night’s sleep of 7-8 hours. My total IPPS score now is 4. The embolisation thanks to the skill of Dr Hacking has been a total success. I am still living in a period of post embolisation elation. 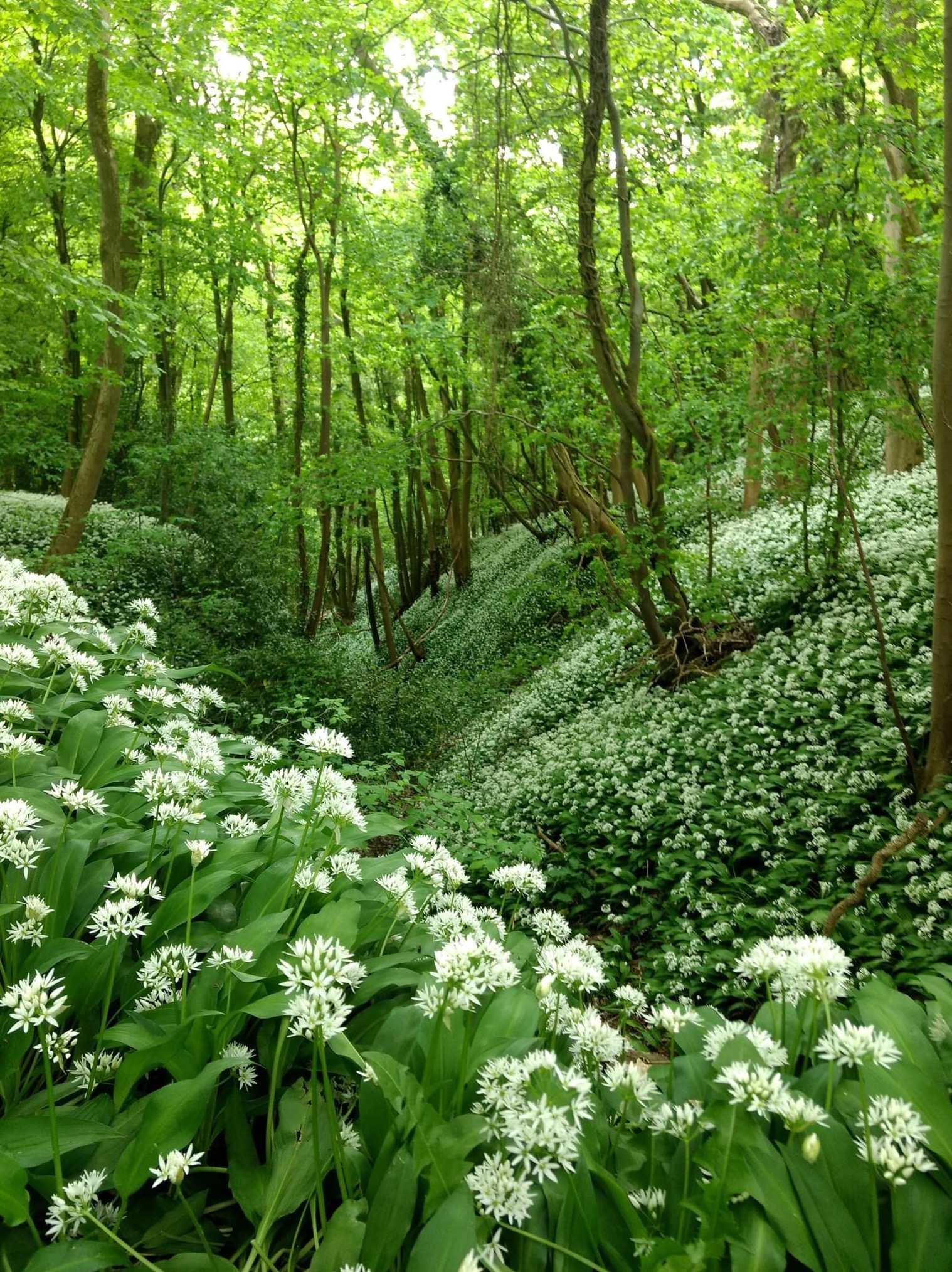 On 4th Jun 2020 MWR contacted Total Health and said, "Just to let you know that my PAE has been a total success. I no longer need the oxybutanin to relax my bladder and I hardly  ever wakes up in the night to urgently go for a pee. PAE is vastly better than having a TURPS op."

We are very grateful for this patient feedback and the message that MWR is cycling through the local countryside and attaches this picture of the wild garlic growing in his local woods. 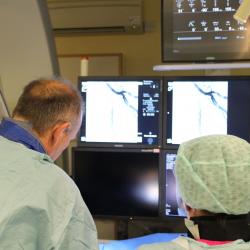 MWR
Patient
View Details
This article is part of a series

In this series Total Health continues to receive detailed feedback from patients who understand the necessity to share their experiences for the benefits of others.

Although in most cases the patients have been happy for us to provide their names, we have nonetheless only used their initials - in the interest of confidentiality. This feedback is from patients who  had varying degrees of symptomatic severity, ranging from milder to total urinary retention. Following urological assessment they were all treated for an enlarged prostate using advanced prostate artery embolisation (PAE). The minimally invasive procedure was performed by pioneering interventional radiologist, Dr Nigel Hacking.

The patient had been suffering from severe lower urinary tractsymptoms (LUTS) caused by an enlarged prostate. This detailed feedback is intended for the benefit of anyone else who might also be suffering from prostate symptoms and is seeking a preferred treatment option.