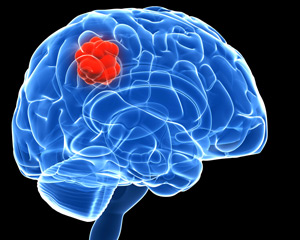 People with the most common type of lung cancer whose disease has spread to the brain are widely treated with whole brain radiotherapy (WBRT). However, this has unpleasant side effects including fatigue, nausea and it can also cause damage to the nervous system. Now a new study carried out by doctors from hospitals across the UK has shown that whole brain radiotherapy is of little benefit to people with lung cancer that has spread to the brain.

More than 1.8 million people will be diagnosed with lung cancer worldwide this year and in a third of the cases the cancer will spread to the brain. Secondary brain tumours are usually treated with whole brain radiotherapy along with supportive care including steroids, but with limited success.

In order to see if patients could be treated as effectively without whole brain radiotherapy (WBRT), researchers designed the non-inferiority Quality of Life after Treatment for Brain Metastases (QUARTZ) trial. They recruited 538 non-small cell lung cancer (NSCLC) patients (aged 18 or older) with brain metastases from 69 centres in the UK and three in Australia between March 2007 and August 2014. Participants were randomly assigned to receive either best supportive care and steroids, or best supportive care, steroids plus whole brain radiotherapy.

The results of the study showed that the whole brain radiotherapy provided little benefit for the group of patients who received it.

"Whole brain radiotherapy was widely adopted into clinical practice based on the assumption it improves tumour control in patients with brain metastases. But in our lung cancer clinics, we were not seeing the improvements we had hoped for in our patients. Survival times are poor and have hardly changed since the 1980s. What's more, the technique's toxicity can be substantial and it can damage cognitive function", explains study author Dr Paula Mulvenna, Consultant Clinical Oncologist, at Newcastle Hospitals NHS Foundation Trust,

Shift in favour of radiosurgery

According to Professor Ruth Langley from the Medical Research Council Clinical Trials Unit at University College London, where the study was designed and co-ordinated, "Whole brain radiotherapy cannot be considered as the standard treatment for all patients with brain metastases because it does not extend survival, improve quality of life, or reduce steroid use. Overtime, there's been a shift away from using whole brain radiation in favour of radiosurgery, which has minimal side effects. Our results could further restrict its use. In the future, potential new treatments (whether using drugs or stereotactic radiotherapy techniques) should be assessed in addition to best supportive care rather than in addition to, or in place of,

The authors of the study say that while whole brain radiotherapy may be beneficial in patients who are younger than 60 years old, it should no longer be considered standard treatment for the majority of patients with non-small cell lung cancer (NSCLC) that has spread to the brain.

The results of the study are published in the Lancet.