A disease of children

To place the importance of this parasitic disease in perspective, year on year, malaria is one of the world's leading causes of illness and death. Malaria sickens around 229 million people each year, more than 409,000 of them fatally, and according to the WHO most of these deaths (67%) are children.

The WHO state that total funding for malaria control and elimination reached an estimated US$ 3 billion in 2019. For comparison according to Reuters, Pfizer Inc on Wednesday raised its 2021 sales forecast for its COVID-19 vaccine by 29% to $33.5 billion.

Malaria and other infectious diseases are responsible for a significant burden in remote communities, affecting families not only through poor health but also impacting children’s education

The challenge for field testing

One significant challenge for making field testing widely available is that the most common and accurate malaria blood test is based on the polymerase chain reaction (PCR) process. PCR tests require trained staff to draw blood, and laboratory conditions to test the samples. In remote areas of sub-Saharan Africa, malaria infections often break out hundreds of miles away from trained staff and lab conditions, making effective infection control very difficult.

While more portable lateral flow tests for malaria have been developed and delivered in recent years, their reliability has been questioned, with some studies suggesting they may be only 75% accurate.

Over the last few years, biomedical engineers from the University of Glasgow and the Ministry of Health in Uganda have worked together to develop a more reliable, low-cost ‘origami’ style alternative to PCR and lateral flow tests.

The test uses sheets of folded wax paper to prepare patient samples for a different type of detection process known as loop-mediated isothermal amplification, or LAMP, which can be delivered in the field. Previous field tests in Uganda have shown the origami test technique is 98% accurate.

A blood sample taken from a patient via fingerprick is placed on in a wax channel in the folded paper. The paper then is folded, directing the sample into a narrow channel and then three small chambers which the LAMP machine uses to test the samples' DNA for evidence of Plasmodium falciparum, the mosquito-borne parasitic species which causes malaria.

In a new paper published today in Nature Electronics, the researchers describe how they have developed a secure smartphone app to pair with their origami tests, which uses deep learning to allow more accurate diagnosis and could facilitate better surveillance of community transmission.

The app, paired with a 3D-printed stand containing a simple heating element, controls the temperature of the origami test, heating it in around ten minutes to the temperature the LAMP process requires to work.

Then, the LAMP results are analysed using a cloud-based machine learning process to ensure they are being correctly administered, enabling users of varying skill levels to properly conduct the test. A positive or negative diagnosis of the patient’s malaria infection is provided via lines on a lateral flow strip similar to those used for home COVID-19 testing.

The patient’s results are securely stored on a blockchain-based ledger to ensure their privacy, and shared with the local authorities to allow anonymised monitoring of local infections.

Professor Jon Cooper, of the University of Glasgow’s James Watt School of Engineering, led the development of the diagnostic system. Professor Cooper said: “In 2018, a World Health Organisation report on controlling malaria highlighted a need for fast, effective testing which would be available to everyone who needed it, even in the most remote, rural locations. The WHO report also recommended that disease diagnostics becomes more digitally integrated into regional or national case management systems to better monitor the spread of malaria.

“We believe that the system we’ve developed could help deliver on both of those urgent requirements. It allows non-experts to administer blood tests anywhere, then have those results securely shared with local and regional authorities. Widespread uptake of a system like this could have a big impact on the spread of malaria in sub-Saharan Africa.” 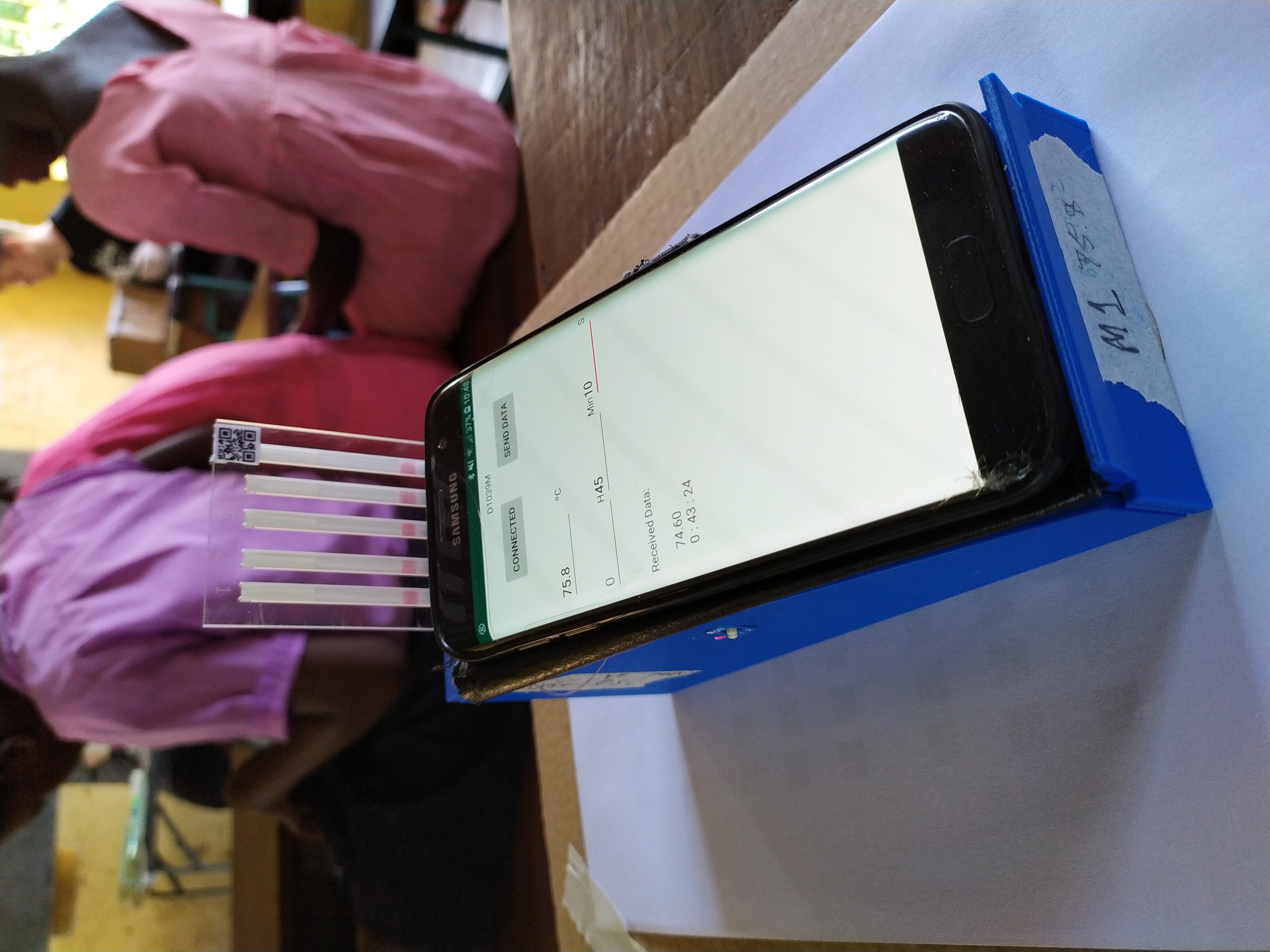 The researchers validated their approach with some initial field tests in Uganda’s rural Eastern Tororo District. They used their system to test blood samples collected from 40 school children from a local primary school aged between 5 and 12 with their parents’ permission. The tests were 98% accurate. All samples were later re-tested in the UK using a standard PCR test for malaria.

Malaria is an acute febrile illness, meaning that that it causes fever a temperature. The first symptoms include:

These are common to many conditions and so the symptoms may be mild and difficult to recognise as malaria. Furthermore, people living in areas where the disease is endemic may have partial immunity and will therefore be asymptomatic. This underscores the need for an accurate and practical test. In an individual who does not have immunity, symptoms usually appear ten to fifteen days after the infective mosquito bite.

If not treated within 24 hours, P. falciparum malaria can progress to severe illness, often leading to death.

Children with severe malaria frequently develop one or more of the following symptoms:

Confirming the accuracy of the new diagnostic technology

Dr Julien Reboud, senior lecturer in biomedical engineering at the University of Glasgow, is a co-author on the paper. Dr Reboud said: “Smartphones are widely used in Africa, even in the remotest areas, making them potentially invaluable in enabling widespread testing and effective surveillance of communicable diseases like malaria".

He goes on to say, “We’re keen to make this technology as widely available as possible and are in early talks with healthcare management providers to explore our options.”

M. Moses Adriko, Program Officer at the Uganda Ministry of Health’s Vector Borne & NTD Control Division, said: “Malaria and other infectious diseases are responsible for a significant burden in remote communities, affecting families not only through poor health but also impacting children’s education. The development of this new digital health technology with our partners at the University of Glasgow uses artificial intelligence and blockchain on a mobile phone to deliver field-based DNA testing coupled with an expert decision diagnostic support tool, all with the required high level of trust and security.

“The testing in Tororo district schools in Eastern Uganda highlighted the high local burden of disease, not only allowing us to treat affected children timely and precisely but also enabling us to provide data that has informed regional health and education authorities to adjust wider disease management strategies locally.”

The research was supported by funding from the UK Global Challenges Research Fund, the Scottish Funding Council, and Engineering and Physical Sciences Research Council (EPSRC).