Mr Anthony Antoniou is a Consultant Laparoscopic and Colorectal Surgeon at St Mark's Hospital Harrow and the Central Middlesex Hospital and he previously played a key role in developing the Colorectal Unit at the world-leading Royal Marsden Hospital.

He studied at Cambridge University before completing his medical training in East Anglia, the South East of England and London. While training in London, Mr Antoniou was affiliated with a number of major teaching hospitals, including King’s College Hospital and St Mary’s Hospital, where he undertook a laparoscopic fellowship. He became a Fellow of the Royal College of Surgeons in 1996.  He was appointed as a Consultant at The Royal Marsden Hospital in 2006. After completing five years as a Senior Clinical Lecturer at The Institute of Cancer Research/ The Royal Marsden Hospital he took up his current position at St Mark's Hospital, Harrow.

Mr Antoniou teaches at both undergraduate and postgraduate levels and he also supervises MD and PhD students. He was head of undergraduate surgical teaching at Chelsea and Westminster Hospital for Imperial College students.

He consults privately at St Marks Hospital and Harley Street. 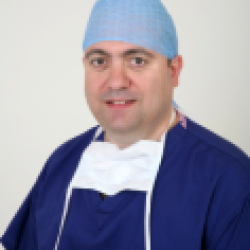