COVID is nothing compared to the challenge of climate change

When Bill Gates tells the BBC that ending the pandemic is "very, very easy", and that for the next thing "we are talking about" there is "no previous precedent", you have to take notice.

Compared to lockdown, the implications of what he is saying have to be far-reaching and profound. His new book (written in partnership with the world's wealthiest) on guidance to avoid further global warming is therefore going to be taken very, very seriously. After all, this is a drive to save the planet from mass extinction.

Relating to investment in technology and other proposals for tackling climate change, Gates has summarised his approach in his article 5 questions to ask about any climate change solution. In essence, his key criteria for assessing proposals include:

1. How many millions of tons of greenhouse gases will the proposal reduce emissions by?

2. Making steel and cement alone accounts for around 10 percent of all emissions. So, “What’s your plan for cement?”

Gates is setting his target at zero emissions, and the top emission-making targets include the following:

How realistic is it to achieve zero emissions?

Lockdown may have gone some way to reduce personal travel, but even if we all converted from fossil fuels and went electric - the electricity still needs to be manufactured and produced. So, how does that work?

Despite the daunting challenge and depressing circumstances there may be some evidence emerging for his optimism. For example, as reported in Total Health back in March 2014, the Tokamak nuclear fusion reactor could be here now as soon as 2025. As reported then, "Following the biggest ever multinational investment, in fact so big that a whole new global currency has had to be created (The Iter Unit of Account) this is not a project that scientists and global investors are taking lightly".

Gates points out that the production of electricity accounts for approximately a quarter of the greenhouse emissions. Therefore, a viable nuclear fusion reactor i.e. one that provides more energy than it consumes, will pave the way for a massive generation of clean energy.

Although some of us are more responsible than others, the issues of climate change and climate changers (i.e. us) cannot be separated. It's a question of both quantity and quality.

Gates points out that industry responds to the needs of the markets, and it is people who drive the nature and extent of the need - along with associated emissions, with household growth and housing demand. For example, according to The International Panel on Climate Change (IPCC) even back in 2006, Britain was consuming a disproportionately large share of the World's 3,300 million hectares of forest. They estimated that the UK carbon footprint was double the world average. However, the worlds' population is still growing at a massive rate and the biggest populations of China and India are - and will catch up with these levels of greenhouse gas emissions. 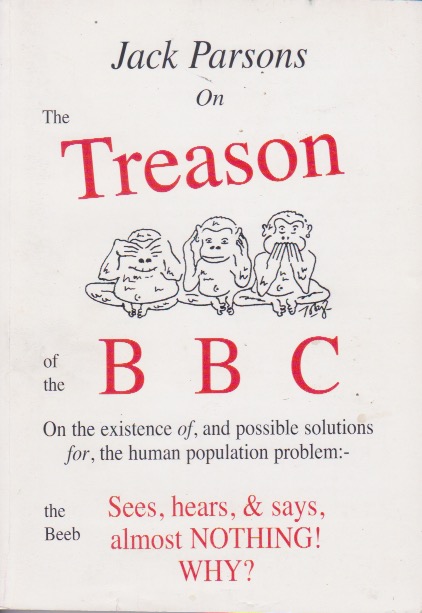 Are we still facing Hardinian Taboo?

In his book, The Treason of the BBC (pictured), former WW2 fighter pilot and population activist, Jack Parsons says, "The expression, 'the elephant in the drawing room' is increasingly used to refer to situations which nearly everyone agrees to pretend that some obviously substantial and pressing problem does not really exist". He goes onto say, "Our collective attitude to the population problem is an example of this phenomenon - only in this case it is not an elephant in the drawing room, but a rapidly maturing mammoth, a creature growing larger, hungrier, and more demanding every day in every way". Jack explained how the BBC avoided reference to human numbers in many items in which they were clearly of the greatest significance - including road and airspace congestion, housing problems, fresh water shortages, migration issues, poverty, lack of education, employment, healthcare, infrastructure, famine and excessive conflict over resources.

Jack Parsons was always keen to stress that he was not advocating population control, but a perfectly free, open, fully-informed public debate on these issues.

It is in part thanks to the efforts of Jack Parsons that the BBC finally started to change its attitude towards reporting on the dangers of overpopulation - culminating with Blue Planet and presentations from Sir David Attenborough. However, it is the World Economic Forum is also seriously promoting Sir David's views on overpopulation - with The planet can’t cope with overpopulation.

The former Director of the British Antarctic Survey and Chair of the London Climate Change Partnership, Prof Chris Rapley has been calling for scientists and policy-makers to drop their de facto embargo on the discussion of overpopulation, which he called the "Cinderella of the great sustainability debate" (Reference, Capital Doctor - see below)

The ecologist, Garrett Hardin would have described our reluctance to discuss overpopulation as a "Taboo". Hardin said, "An effective gatekeeper of the mind does not call attention to itself. It actuates a psychological mechanism called a taboo", and the process relating to populations has been named after him - Hardinian Taboo. Hardin's article - The Tragedy of the Commons is said to be the single most referenced and cited papers. In his essay, Hardin concludes saying, "The only way we can preserve and nurture other and more precious freedoms is by relinquishing the freedom to breed, and that very soon". He finishes with, "Only so, can we put an end to this aspect of the tragedy of the commons".

When talking about why he's going to India, Bill Gates says, "India is in an interesting position: It has both a deep understanding of the challenges and great capacity to help solve them. India’s cities are flush with highly educated people working in well-funded labs, as well as extremely poor communities." He says, "That makes the country an ideal place to understand both the problems and the solutions". The governments and people of both India and China are acutely aware of the role of government intervention and fertility control as an attempt to eliminate poverty.

According to the Association for Asian Studies, "Overpopulation has been India’s major concern for almost five decades. In June 2017, the United Nations reported that India’s population will rise to 1.5 billion by 2050. In order to limit its population growth rate, India has been using sterilization as a method of population control since 1951". However, history would seem to recall that attempts at population control simply do not work in practice, and that 'control' should not be confused with other strategies including family planning. However, as Hardin puts it, "A finite world can support only a finite population; therefore, population growth must eventually equal zero."

So, quite evidently we need to find an answer to this - and fast. Bill Gates points out that there has to be an innovation effort to solve climate change on a scale the world has never seen before and that all initiatives have to start with governments.

So, what is coming next?

Following policy intervention with regard to COVID-19, We have already witnessed massive government intervention at a global level. Populations have been (mutually) coerced into lockdown and into taking extreme measures. It is worth noting that according to Hardin 'coercion' is not necessarily a bad thing, in fact he argues that it is a part of the required approach. The point is that if Bill Gates is saying that that pandemic bit was very, very easy - then what is coming next for us is presumably not going to be quite so easy.

There are a number of population development and associated emission scenarios. There is also an absolute upper population limit for all organisms including man, and so continuance of the current trend is impossible. Whatever the strategy is - it has to be implemented at global level. The concern is that the 'technology solution' alone is not going to work.

The Capital Doctor article (copy below) back in 2006 ended by predicting that there would be a riot. Hardin said there needed to be "uproar" and described two types of uproar - one more acceptable than the other. Perhaps the emergence of Extinction Rebellion who managed to bring London to a standstill even before lockdown is further evidence that people - especially young people recognise the need for change, and are prepared to act on it.

The only question is - what form will that change take?